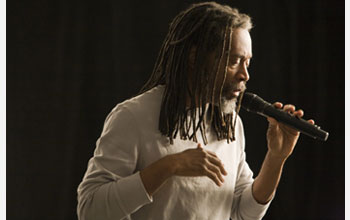 View a video about the "The Music Instinct."

The Music Instinct: Science and Song, is a television documentary that brings together researchers and musicians to investigate the biological, emotional and psychological impact of music. Elena Mannes and Margaret Smilow, director and producer (respectively), of the two-hour documentary--developed with major funding from the National Science Foundation--were awarded the Grand Prix at Pariscience 2009, an international science film festival.

A group of researchers led by neuroscientist Daniel Levitin joined musicians Bobby McFerrin, Yo-Yo Ma, Evelyn Glennie, Jarvis Cocker and Richard Hawley to explore the connections between music and the human mind, the body and the universe.

Pariscience is among the activities organized by France's Association Science & Télévision, which seeks to promote the role of science on television and promote co-productions between international producers, institutions, researchers, filmmakers and television. Mannes and Smilow split a prize of 10,000 euros as part of being awarded the best film in competition.

More information about "The Music Instinct," along with video, a contest, lesson plans, a blog and other resources are available at http://www.pbs.org/wnet/musicinstinct/.