Gamma-ray source identified for the first time, leading to better understanding of the early universe 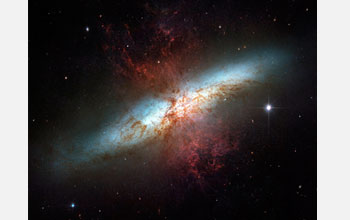 Image of M82 released by the Hubble Heritage project.

The VERITAS (Very Energetic Radiation Imaging Telescope Array System) collaboration, an international team of astronomers from the United States, Canada, United Kingdom and Ireland, has discovered very high energy (VHE) gamma rays emitted by the starburst galaxy M82 (the Cigar Galaxy). The observed gamma rays have energies more than a trillion times higher than the energy of visible light, and are the highest energy photons ever detected from a galaxy undergoing large amounts of star formation. The discovery was made from data taken over a two-year long observing campaign.

This is the first example of a very-high-energy gamma-ray source associated with a starburst galaxy, and its discovery provides fundamental insight into the origin of cosmic rays," said Rene Ong, a professor of physics at the University of California, Los Angeles, and the spokesperson for the VERITAS collaboration.

"Our program has been supporting studies of VHE gamma-rays and cosmic rays in separate and very different experiments for over a decade," said Jim Whitmore, program director for particle and nuclear astrophysics in NSF's Division of Physics. "This significant VERITAS discovery provides an immediate connection between the sources of these two types of very energetic particles and enhances our understanding of the early universe."

Cosmic rays are particles striking the Earth's atmosphere and are produced in violent processes in our own Milky Way galaxy and beyond. Although the Earth is constantly bombarded by cosmic rays, their origin remains a mystery nearly 100 years after their discovery. The VERITAS result provides critical evidence to help scientists understand the origin of cosmic rays by clearly linking the processes related to the life-cycle of stars with the acceleration of cosmic rays.

The VERITAS observations strongly support the long-held theory that supernovae and massive star winds are the dominant accelerators of cosmic-ray particles. Galaxies with high levels of star formation such as M82 have high numbers of supernovae and massive stars. These "starburst" galaxies would then be expected to have a higher number of cosmic rays per unit volume.

The VERITAS discovery indicates that the cosmic-ray density in M82 is approximately 500 times the average density in our Galaxy, the Milky Way, thus providing key evidence to unlocking the mystery of the origin of cosmic rays.

Wystan Benbow, an astrophysicist at the Smithsonian Astrophysical Observatory (SAO), working with the VERITAS, coordinated this project for the VERITAS collaboration. The results of this study, titled "A Connection Between Star Formation Activity and Cosmic Rays in the Starburst Galaxy M82" appeared on Nov. 1, 2009, in the advance online publication of the journal Nature. The article will appear in the published version of Nature on Nov. 4. The SAO VERITAS group, which Benbow leads, manages the operation of VERITAS and plays a major role in the scientific activities of the collaboration.

"We knew that the detection of M82 would have important scientific implications. As a result, we scheduled an exceptionally deep exposure immediately after the experiment became fully operational," says Benbow. "The data took almost two years to acquire, and needed to be meticulously analyzed to extract the gamma-ray signal which is over 1 million times smaller than the background noise. Although the signal is only a tiny fraction of the data, we made many checks for possible bias and we are confident that the signal is genuine."

M82 is a bright galaxy located approximately 12 million light years from Earth, in the direction of the Ursa Major constellation. In the active starburst region at its center, stars are being formed at a rate approximately ten times more rapidly than in entire ‘normal' galaxies like our own Milky Way. The cosmic rays produced in the formation, life and death of the massive stars in this region eventually produce diffuse gamma-ray emission via their interactions with interstellar gas and radiation. Due to its unusually high cosmic-ray and gas densities and its relative proximity, M82 is expected to be the brightest starburst galaxy in VHE gamma rays.

The images can be used to infer the arrival direction and initial energy of the primary gamma rays. This technique is used by VHE observatories throughout the world, and was pioneered under the direction of SAO's Trevor Weekes, using the 10-meter Cherenkov telescope at the Fred Lawrence Whipple Observatory (FLWO), just south of Tucson, Arizona. The Whipple 10-m telescope was used to detect the first Galactic and extragalactic sources of VHE gamma rays.

VERITAS continues the tradition of the 10-m telescope and is also located at FLWO. It is comprised of an array of four 12-meter (39 feet) diameter Cherenkov telescopes. VERITAS began full-scale observations in September 2007. The telescopes are used to study the remnants of exploded stars, distant galaxies, powerful gamma ray bursts, and to search for evidence of mysterious dark matter particles.

VERITAS is operated by a collaboration of more than 100 scientists from 22 different institutions in the United States, Ireland, England and Canada. VERITAS is funded by the U.S. National Science Foundation, U.S. Department of Energy, Smithsonian Institution, Natural Sciences and Engineering Research Council of Canada, Science Foundation Ireland, and Science and Technology Facilities Council of the UK.