The Snows of Kilimanjaro: For How Much Longer?

Shrinking rapidly ... and likely to be lost 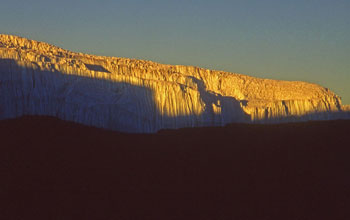 The ice fields atop Tanzania's Mount Kilimanjaro glow golden in the last of the afternoon sun.

The iconic snows of Kilimanjaro still exist--but for how long?

The remaining ice fields atop famed Mount Kilimanjaro in Tanzania could be gone within two decades and perhaps even sooner, based on the latest survey of the ice fields on the mountain.

These predictions, published this week in the journal Proceedings of the National Academy of Sciences (PNAS), are among the latest dramatic physical evidence of global climate change.

The findings, by paleoclimatologist Lonnie Thompson at Ohio State University and co-authors, indicate that a major cause of this ice loss is likely to be the rise in global temperatures.

Although changes in cloudiness and precipitation may also play a role, they appear less important, particularly in recent decades.

"The loss of Mount Kilimanjaro's ice cover has attracted worldwide attention because of its impact on regional water resources," said David Verardo, director of NSF's Paleoclimate Program, which funded the research along with Ohio State University's Climate, Water and Carbon Program. "The remaining ice fields are melting from all sides," said Verardo. "Like many glaciers in mid-to-low latitudes, Kilimanjaro's may only be with us for a short time longer."

This first calculation of ice volume loss indicates that from 2000 to 2007, the loss by thinning is now roughly equal to that by shrinking.

Thompson and colleagues have amassed a trail of data showing the rapid loss of ice atop Africa's highest mountain:

These observations confirm that the current climate conditions at Mount Kilimanjaro are unique over the last 11 millennia.

"This is the first time researchers have calculated the volume of ice lost from the mountain's ice fields," said Thompson, a scientist at Ohio State's Byrd Polar Research Center. "If you look at the percentage of volume lost since 2000 versus the percentage of area lost as the ice fields shrink, the numbers are very close."

While the loss of mountain glaciers is most apparent from the retreat of their margins, Thompson said an equally troubling effect is the thinning of the ice fields from the surface.

The summits of both the Northern and Southern Ice Fields atop Kilimanjaro have thinned by 1.9 meters (6.2 feet) and 5.1 meters (16.7 feet), respectively.

The smaller Furtwangler Glacier, which was melting and water-saturated in 2000 when it was drilled for samples, has thinned as much as 50 percent between 2000 and 2009.

"It has lost half of its thickness," Thompson said. "In the future, there will be a year when Furtwängler is present and by the next year, it will have disappeared.

"The whole thing will be gone!"

Thompson's team drilled six cores through Kilimanjaro's ice fields in 2000 and published their findings in the journal Science two years later. That work established a detailed baseline against which more recent data can be compared.

Thompson said the changes occurring on Mount Kilimanjaro mirror those on Mount Kenya and the Rwenzori Mountains in Africa, as well as tropical glaciers high in the South American Andes and in the Himalayas.

"The fact that so many glaciers throughout the tropics and subtropics are showing similar responses suggests an underlying common cause," he said.

"The increase of Earth's near-surface temperatures, coupled with even greater such increases in the mid- to upper-tropical troposphere, as documented in recent decades, would at least partially explain the observed widespread similarity in glacier behavior."

Along with Thompson, Ellen Mosley-Thompson, Henry Brecher and Bryan Mark, all with Ohio State's Byrd Polar Research Center, and Douglas Hardy from the University of Massachusetts contributed to the study.