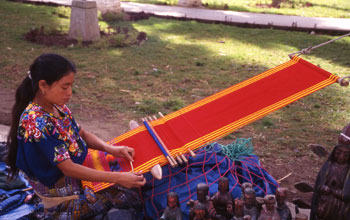 Passing on material things, as well as knowledge and skills, is important to wealth inheritance.

A new study reveals the important role inherited wealth plays in sustaining economic inequality in small scale societies. A team of 26 anthropologists, statisticians, and economists based at the Santa Fe Institute in New Mexico amassed an unprecedented data set allowing 43 estimates of a family's wealth inheritance and found that financial inequality among populations largely depends on the "technologies" that produce a people's livelihood.

According to the report, released in the October 30 edition of the journal Science, technologies differ across societies. Technologies are defined here to include everything one needs to make a living--from material things such as farms, herds and other real property, to knowledge, skills and other valuable resources.

Hunter-gatherers, for example, rely on their wits, social connections and strength to make a living. In these economies, wealth inheritance is modest because wits and social connections can be transferred only to a certain degree. The level of economic inequality in hunter-gatherer societies is on a par with the most egalitarian modern democratic economies.

Coordinated by Monique Borgerhoff Mulder, an evolutionary anthropologist at the University of California at Davis and Samuel Bowles, an economist at the Santa Fe Institute, researchers analyzed the degree of wealth inequality in small scale societies ranging from egalitarian hunter gatherers to hierarchical farmers and herders in Africa, Asia, Europe and Latin America.

In one of their more remarkable findings, the researchers note that offspring in the top ten percent of the wealthiest families in farming populations are 11 times more likely to retain a high wealth status than the offspring of the poorest tenth. Among herders, the rich-born are more than 20 times more likely than the poor-born to attain high status. The researchers reason that in these communities, wealth takes the form of readily inherited materials, livestock and land.

"These societies exhibit levels of wealth inheritance and of inequality rivaling the most unequal national economies in the world today," said Borgerhoff Mulder.

The authors note that wealth in the emergent knowledge-based economy of today in some ways resembles that of hunter-gatherers in that its characteristic forms of wealth -skill and social connections--are less readily passed from parent to child than, say, a factory or plantation. But this does not mean that the new information-driven Internet Age will necessarily assure less inequality.

"While the form of wealth--whether it is easily inherited like material wealth or not--is an important determinant of the extent of intergenerational wealth inheritance and the level of resulting economic inequality, we also found that a given society's institutions and norms make a big difference," said  Bowles.

The research is part of the on-going Persistent Inequality project of the Behavioral Sciences Program at the Santa Fe Institute, and is supported by the Cowan Endowment to the Santa Fe Institute, the Russell Sage Foundation and the cultural anthropology program in the division of behavioral and cognitive sciences at the National Science Foundation.