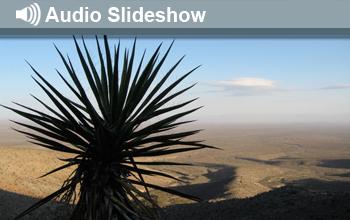 In the Mojave Desert winds howl across this hottest place in North America, blowing sands across Death Valley and through empty ghost towns, swirling across treeless land for hundreds of miles. But even in the otherworldly Mojave, life thrives. The Joshua tree (Yucca brevifolia), an indicator species for this desert, defines the Mojave's boundaries. In spring when the rains come, brightly colored flowers bloom in profusion--nature's paintbrush on an otherwise monotone landscape.

Now the Mojave's plant life, sparse as it has always been, is facing new challenges. As Earth's climate warms, arid soils lose more nitrogen, which could lead to deserts with even less plant life than they sustain today.

Available nitrogen is second only to water as the biggest constraint to biological activity in arid ecosystems, but ecologists have struggled to understand the balance of the input and output of nitrogen in deserts. For the first time, however, researchers have discovered a mechanism that balances the nitrogen budget in deserts: Higher temperatures cause nitrogen to escape as gas from desert soils.

The researchers' results, published in this week's issue of the journal Science, suggest that most climate change models need to be altered to consider these findings.

"This discovery is completely reorganizing how we think about nitrogen in desert ecosystems," said Robert Sanford, program director in the National Science Foundation (NSF)'s division of environmental biology, which funded the research.

In the past, researchers focused on biological mechanisms in which soil microbes near the surface produce nitrogen gas that dissipates into the air, but ecologists Jed Sparks and Carmody ("Carrie") McCalley, both at Cornell University and co-authors of the paper, found that non-biological processes are playing a bigger role in nitrogen losses from soil to air.

"This is a way that nitrogen is lost from an ecosystem that people have never accounted for before," said Sparks.  "It allows us to finally understand the dynamics of nitrogen in arid systems."

He and McCalley used instruments sensitive enough to measure levels of nitrogen gases in parts per trillion. These instruments had never before been applied to soil measurements.

The researchers covered small patches of soil in the Mojave Desert with sealed containers to measure a group of more than 25 different compounds containing oxidized nitrogen, as well as ammonia gases, that escaped from desert soils.

To rule out the role of light in this process, McCalley kept light constant but varied the temperatures in lab experiments.

"At 40 to 50 degrees Celsius (about 100 to 120 degrees Fahrenheit), we found rapid increases in gases coming out of the soil regardless of the light," McCalley said.

"Any place that gets hot and dry, in all parts of the world, will likely exhibit this pattern," said Sparks.

The Mojave Desert covers a large part of southeastern California and smaller parts of central California, southern Nevada, southwestern Utah and northwestern Arizona. The Mojave receives less than ten inches of rain a year, and in Death Valley, the air temperature may surpass 49 C (120 F) in late July and early August. After temperature, wind is the most significant phenomenon in the Mojave.  Both temperature and precipitation range widely, in all seasons, across the desert.

Further temperature increases and shifting precipitation patterns due to climate change may lead to more nitrogen losses in arid ecosystems, making their soils even more infertile and unable to support most plant life, according to McCalley. Although some climate models predict more summer rainfall for desert areas, the water, when combined with heat, would greatly increase nitrogen losses, she said.

"We're on a trajectory where plant life in arid ecosystems could cease to do well," said McCalley.

More nitrogen oxides in the lower atmosphere creates ozone near the ground, which contributes to air pollution and increases the greenhouse effect that warms the planet. With deserts accounting for 35 to 40 percent of Earth's surface, and arid and semi-arid lands the most likely areas for new human settlements, air quality issues, loss of soil fertility, and further desertification need to be considered as the climate warms, the researchers said.

They also pointed out that most climate modelers now use algorithms that only consider biological factors to predict nitrogen gases coming from soils.

"The code in climate models would have to change to account for abiotic impacts on this part of the nitrogen budget," McCalley said.