Butterflies in the Same Milieu, Mate With Others of Like Hue 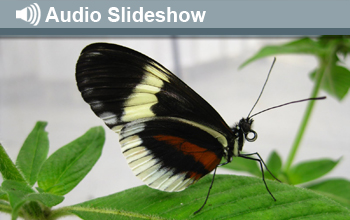 Scientists have found a population of tropical butterflies that may be on its way to splitting into two distinct species based on wing color and mate preference. In a paper published this week in the journal Science, the researchers describe the relationship between diverging color patterns in Heliconius butterflies and the long-term divergence of populations into new and distinct species.

"Evolutionary biologists grapple with the question of how speciation happens; in other words, how does one, interbreeding group split into two groups that no longer breed with one another?" said Nancy Huntly, program manager in the National Science Foundation's biological sciences directorate. "This paper sheds light on that very question."

"Our paper provides a unique glimpse into the earliest stage of ecological speciation, where natural selection to fit the environment causes the same trait in the same population to be pushed in two different directions," said Marcus Kronforst, a Bauer Fellow in the Center for Systems Biology at Harvard University. "If this trait is also involved in reproduction, this process can have a side effect of causing the divergent subpopulations to no longer interbreed. This appears to be the process that is just beginning among Heliconius butterflies in Ecuador."

Heliconius butterflies display incredible color pattern variation across Central and South America, with closely related species usually sporting different colors. In Costa Rica, for example, the two most closely related species differ in color: one species is white and the other is yellow. In addition, both species display a marked preference to mate with butterflies of the same color.

The Ecuadorian population examined by Kronforst and his colleagues shows the same white and yellow variation found in Costa Rica; but the Ecuadorian population has not yet reached a level of strong reproductive isolation. The entire population lives in close proximity, and individual butterflies of both colors come in contact with, and mate with, each other.

But, by studying the Ecuadorian population in captivity, the scientists found the two colors do not mate randomly. Despite the genetic similarity between the groups--white and yellow varieties differ only at the color-determining gene--yellow Ecuadorian butterflies show a preference for those of the same color. White male butterflies, most of which are heterozygous at the gene that controls color, show no color preference.

"This subtle difference in mate preference between the color forms in Ecuador may be the first step in a process that could eventually result in two species, as we see in Costa Rica," said Kronforst, who began studies of Heliconius color pattern and behavioral genetics in the laboratory of Lawrence Gilbert at the University of Texas at Austin. Gilbert, professor in the Section of Integrative Biology, is a coauthor on this paper.

Previous studies of species formation have focused on the characteristics of well-differentiated species, and the health and viability of their hybrids in particular, in an effort to identify how the species may have emerged and how they stay distinct. Heliconius provides a model for a different kind of study--one in which researchers considered species emergence from the opposite end, studying populations that have yet to diverge into separate species in order to identify the role of mate choice in the potential emergence of new species.

Having identified color-based mate preference in Heliconius, the researchers used a battery of genetic markers to compare the genomes of the white and yellow varieties, showing that they are genetically identical except for their different colors and preferences. Their work suggests that the genes for color and preference are very close to one another in the genome; the two traits could even be caused by the same gene. Their next step is to identify the gene (or genes) responsible for the differences in color and mate preference.

"If we can identify this gene or genes, we can say conclusively how they influence both color and mate choice," said Kronforst. "Subsequent work could elucidate exactly how changes in individual genes can, over long periods of time, lead to novel species."

"This study shows the great potential of the genus Heliconius as a model system for integrating genetics, development, behavior, ecology and evolution," said Gilbert. "It is the culmination of diverse contributions of the co-authors involving insectary, field and laboratory research over more than a decade."

In addition to Gilbert, co-authors on the Science paper with Kronforst are Nicola L. Chamberlain and Ryan I. Hill, both of Harvard; and Durrell D. Kapan of the University of Hawaii. Their work was funded by the National Science Foundation and the National Institutes of Health.

View a slideshow and video of courtship behavior taken during an experiment.