Unusual Explosion Sparks New Insight Into the Life of Stars

Researchers' discovery is described in the journal Science Express 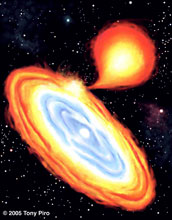 An artist's impression of a star system that may explode as a Type .Ia supernova is shown here.

Scientists in California have discovered a new way that stars explode, in research funded by the National Science Foundation (NSF).

The discovery hinges on an unusual explosion in the galaxy NGC 1821, roughly 160 million light years away, according to astronomer Dovi Poznanski of the Lawrence Berkeley National Laboratory. Poznanski and colleagues report their discovery in a paper published today in the journal Science Express.

"Stellar explosions are some of the key processes in the evolution of the universe," said Thomas Statler, an NSF program director in its division of astronomical sciences, "They influence the formation of stars and the growth of galaxies, and they produce nearly all of the metallic elements that form the cores of planets like Earth."

Light from the exploding star reached Earth in 2002 and was recorded by a robotic telescope at Lick Observatory, near San Jose, California. At first, the flash was mistakenly classified as an ordinary "Type II" supernova, a catastrophic event in which a massive star destroys itself.

A single supernova releases a hundred times more energy in its first second than the Sun will produce in its entire lifetime. The Sun is too small to explode this way, but Earth still owes its existence to supernovae. Heavy elements, like iron, gold, and uranium, are made through no other means than a supernova.

When Poznanski and his colleagues re-examined the 2002 data this year, they realized they had something new on their hands. The spectrum---the inventory of the explosion's light across different colors---didn't match typical supernovae. It indicated an abundance of helium, and a hint of the metal vanadium.

Poznanski and University of California (UC) Berkeley graduate student Mohan Ganeshalingam analyzed how the object, designated SN 2002bj, had brightened and faded over time. "It was three to four times faster than a standard supernova," said Poznanski, "basically disappearing within 20 days. Its brightness just dropped like a rock."

Christopher Stubbs, chair of the Department of Physics at Harvard University, jokingly dubbed it a ".Ia" (point one A) supernova, because it is one-tenth as bright for one-tenth the time as a Type Ia supernova, and the name stuck.

The researchers realized that these properties matched the description of a new type of explosion proposed in 2007 by a group led by Lars Bildsten of the Kavli Institute for Theoretical Physics at UC Santa Barbara. Bildsten's theoretical work, also supported by NSF, examined what happens when two ultra-dense white dwarf stars are in orbit around each other.

White dwarfs are the ultimate end of stars like the Sun, in which the mass of an entire star is packed into a volume roughly the size of Earth. If two white dwarfs are orbiting closely enough, matter can flow from one to the other, building up a thick layer of helium on the second star. In the right circumstances, the helium layer can explode in a thermonuclear blast.

Bildsten and his colleagues calculated that the explosion would look, at first glance, like a regular supernova, but it would appear faster and only about one tenth as luminous. The explosion would eject huge amounts of helium and vanadium into space.

"We think this may well be a new physical explosion mechanism, not just a minor variation of ones already known," said Alex Filippenko, UC Berkeley professor of astronomy and co-author on the discovery paper. "It whets my appetite for what else we might find."