Ants, Like Humans, Use Bacteria to Make Their Gardens Grow 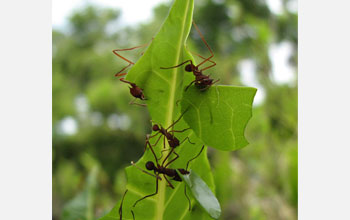 Leaf-cutter ants doing what they do best--with the help of bacteria.

Leaf-cutter ants, which cultivate fungus for food, have many remarkable qualities.

Now there's a new one to add to the list: these ant farmers, like their human counterparts, depend on nitrogen-fixing bacteria to make their gardens grow.

The findings, reported this week in the journal Science, document a previously unknown symbiosis between ants and bacteria, and provide insights into how leaf-cutter ants have come to dominate the American tropics and subtropics.

The research, conducted by a team led by University of Wisconsin-Madison bacteriologist Cameron Currie, identifies what is likely the primary source of terrestrial nitrogen in the tropics, a setting where nutrients are otherwise scarce.

"These ants are both intrinsically fascinating, and significant processors of organic matter in forests," says Matt Kane, program director in the National Science Foundation (NSF)'s division of environmental biology, which funded the research.

"The nitrogen fixed by these bacteria should be incorporated into the overall nitrogen budget calculations for the forests in which leaf-cutter ants thrive."

Nitrogen is a limiting resource, says Garret Suen, a UW-Madison scientist and a co-author of the paper. "If you don't have it, you can't survive."

Indeed, the partnership between ant and microbe permits leaf-cutters to be amazingly successful. Their underground nests, some the size of small houses, may harbor millions of inhabitants.

In the Amazon forest they comprise four times more biomass than do all land animals combined.

"This is the first indication of bacterial garden symbionts in the fungus-growing ant system," says Currie.

A critical finding in the new study, according to the Wisconsin scientists, is that the nitrogen, which is extracted from the air by the bacteria, ends up in the ants themselves and, ultimately, benefits the nitrogen-poor ecosystems where the ants thrive.

They make their living by carving up foliage and carrying it back to their nests in endless columns to provide the raw material for the fungus they grow as food.

"But plant feeding insects are known to be nitrogen limited," explains Currie, "and the plant biomass nitrogen is lower than what the insects need for survival."

Enter the nitrogen-fixing bacteria, two species of which were isolated in laboratory and field colonies of the ants. But merely finding the bacteria, Suen emphasizes, wasn't enough.

It was necessary to prove that the ants were actually utilizing the nutrient to confirm a true mutualism.

"This is important because it could be that the bacteria are fixing nitrogen for themselves and not actually benefiting the ants," says Suen. "Showing that the nitrogen fixed by the bacteria is incorporated into the ants establishes that these bacteria aren't just transient visitors."

One other insect, the termite, has been previously shown to utilize nitrogen-fixing bacteria. And other bacteria-ant symbioses have been documented.

However, the discovery of this nitrogen-fixing mutualism in ants has significant ecological implications, say the scientists, given the dominance of ants in virtually all the world's terrestrial ecosystems.

The research suggests that an important source of nitrogen in the American tropics and subtropics is derived through the partnership of ant and bacteria.

"It's possible," says Currie, "that this fixed nitrogen may have ecosystem-scale impacts."

The partnership with bacteria, which Currie says could extend back to the origins of the gardening ants some 50 million years ago, confers a competitive edge that has permitted leaf-cutters to prevail in their environments.

"Without nitrogen," says Suen, "there is no way these ants could achieve such large colony sizes. Colonies with millions of ants likely require a tremendous amount of nitrogen."

The study also was funded by the U.S. Department of Energy through the Great Lakes Bioenergy Research Center.

In addition to Currie and Suen, the paper was co-authored by Adrian A Pinto-Tomas now of the University of Costa Rica; Mark A. Anderson, Fiona S. T. Chu and W. Wallace Cleland of UW-Madison; and David M. Stevenson and Paul J. Weimer of the U.S. Department of Agriculture's Dairy Forage Research Center.