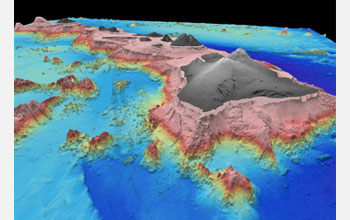 The topography of the Hawaiian Islands is shown in 3-D.

The Hawaiian Islands are one of the outstanding volcanic features on Earth, but their origins have been shrouded in mystery.

Still in debate has been a theory proposed 40 years ago, which states that mid-tectonic plate hotspots such as Hawaii are generated by upwelling plumes of lava from the base of Earth's lower mantle.

Cecily Wolfe, a geologist at the University of Hawai‘i at Mânoa School of Ocean and Earth Science and Technology, and a multi-institutional team of scientists put the theory to the test.

Their research findings will be published in this week's issue of the journal Science.

A deployment of a large network of sea-floor seismometers in Hawai‘i, through a National Science Foundation (NSF)-funded expedition called the Plume-Lithosphere Undersea Melt Experiment (PLUME), opened up a window into the Earth.

PLUME alllowed scientists to obtain the best picture yet of a mantle plume originating from the lower mantle, and revealed Hawai‘i's deep roots.

"The hypothesis that hot spots like Hawaii originate from mantle plumes is one of the longest-standing and most controversial topics in geology," says Robert Detrick, director of NSF's Division of Earth Sciences and a co-author of the paper. Detrick conducted the research while at the Woods Hole Oceanographic Institution

"This pioneering experiment combining large numbers of broadband seismometers on the seafloor with instruments on land has provided the most persuasive evidence yet for the existence of a mantle plume extending into the lower mantle beneath Hawaii."

The project involved four oceanographic research cruises to deploy and recover ocean bottom seismometers at 73 sites, led by Gabi Laske of the Scripps Institution of Oceanography and John Collins of the Woods Hole Oceanographic Institution.

Sean Solomon of the Carnegie Institution for Science provided a concurrent deployment of land seismometers on the main Hawaiian Islands.

The seismometers were used to record the timing of seismic shear waves from large earthquakes (magnitudes greater than 5.5) around the world.

This information was used to determine whether seismic waves travel more slowly through hot rock as they pass beneath Hawai‘i.

Combining the timing measurements from earthquakes recorded on many seismometers allowed Wolfe and colleagues to construct a sophisticated 3-dimensional image of the Hawaiian mantle.

In the upper mantle, the Hawaiian Islands are underlain by low shear-wave velocities, linked with hotter-than-average material from an upwelling plume.

The location of the Hawaiian Islands in the middle of the Pacific Ocean had hampered past efforts to resolve its deep structure.

Seismometer deployments limited to land sites on the islands did not provide sufficient coverage for high-resolution imaging, and Hawaii is also far from the most active circum-Pacific zones of earthquakes.

As a result, scientists turned to a more technologically challenging, marine approach by placing temporary instrumentation on the seafloor to record seismic waves.

Results of the project make a strong case for the existence of a deep mantle plume, with implications not just for Hawaii, but for how convection in the solid Earth works; the Earth's composition with depth; and the inner Earth's evolution.

"This experiment was first conceived by our team a decade ago," says Wolfe. "The results have been worth the wait and exceeded all expectations. The success of such an ambitious seafloor experiment is a technological feat in itself, and signals a new era in the field of marine seismology."

Has the question of hot spots and mantle plumes been settled at last?

"It's a very strong vote," says Solomon, "in favor of the plume model."