A Week to Focus on Computer Science Education 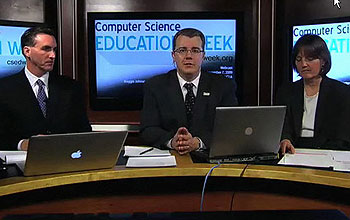 It's one of the most vexing paradoxes facing the U.S. today, even if most people are not aware of it. American IT and software companies dominate the world market place and the vast majority of colleges and universities have excellent computer science programs, yet at the K-12 level, computer science education is almost nonexistent. Meanwhile, other countries have stepped up their education efforts at this level and are beginning to pull ahead of the U.S. in several key areas. How did that happen and what does that mean for our future competitiveness in the global economy? During a time when the United States is focusing on science, technology, engineering and mathematics education, why has computer science been left behind?

There have been discussions and attempts in the past to revamp K-12 computer science education, but the comprehensive teaching standards and other concrete efforts needed for this effort to succeed remain largely nonexistent. In response to this growing crisis, this week has been declared Computer Science Education (CSED) Week by Congress to help raise awareness of the problem and highlight some of the efforts taking place across the country to improve computer science education in our schools and communities.

To understand why organizations such as the Association for Computing Machinery (ACM) and the National Science Foundation (NSF) are supporting CSED week, it helps to understand just how neglected the subject is in American schools. Even with the invention of the first personal computer in the late 1970s, computer science has never been widely taught at the K-12 level. Most school districts and states lack computer science curriculum standards, few K-12 teachers have a computer science background and most computer science courses are elective, not mandatory.

What makes this situation so puzzling is that computer science in United States thrives at the post-secondary level.  According to a 2006 report by the Computer Science Teachers Association, computer science departments produced over 45,000 baccalaureate and 850 PhD degrees that year. Yet only 16,622 high school students entering college take the Advanced Placement (AP) computer science exam, according to the College Board that administers the AP tests. Compare that with the over 230,000 students who took the AP Calculus AB exam and the over 360,000 students took the U.S. History AP exam, and the neglect of computer science at the K-12 level comes into the focus.

How does the current state of computer science education in the United States compare to other developed countries? Several countries, including Canada, Israel, New Zealand, Australia and several Asian countries have implemented a comprehensive computer science curriculum.

The current economic crisis and changing global economy illustrate why is it important for the United States to develop its own comprehensive computer science curriculum for grades K-12. The U.S. Bureau of Labor Statistics reported that 854,000 professional information technology jobs will be added between 2006 and 2016, an increase of about 24 percent. Many of these jobs will not require a four-year college degree, but all of them require a solid background in computer science.

These future jobs could be a mechanism for increasing the economic stability of our country, but now we are in danger of falling to prepare applicants for them. Additionally, the notion that only future computer scientists or IT professionals need training in computer science is no longer true. Outside of the IT industry, knowledge of computer science and computer programming is becoming a necessary skill for many professions including jobs in science and technology, and also careers in marketing, advertising, journalism and the creative arts. For example, anyone working with large datasets, from scientists to market researchers, who are responsible for analyzing data and discovering knowledge, do so by using computer programs.

As computers are becoming mainstream tools in the fields of journalism to creative arts, professionals in those fields are becoming increasingly called on to utilize their computer programming skills on the job.

The BPC funded research by Jane Margolis, a UCLA researcher working in the Los Angeles Unified School District, seeks to implement a comprehensive computer science education at the K-12 level. The BPC also funded Ursula Wolz, a researcher from the College of New Jersey. Wolz and her team created a summer institute and an afterschool program that teaches students computer science through the development of an online magazine. These research projects are just two examples of the innovative research grants funded by NSF that are working to increase computer science education at the K-12 level.