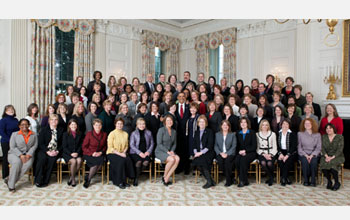 View a video of President Obama honoring outstanding teachers in math and science.

On Jan. 6, President Barack Obama honored educators from across the country with awards for excellence in mathematics and science teaching and mentoring in his second "Educate to Innovate" campaign event for excellence in science, technology, engineering and math (STEM) education. The event was held in the White House East Room. The president also announced key new partnerships in his campaign to help reach the administration's goal of moving American students from the middle to the top of the pack in science and math achievement over the next decade. Vice President Joe Biden and his wife, Jill Biden, also attended, as well as Cabinet officials, Members of Congress, and National Science Foundation (NSF) Director Arden L. Bement, Jr.

The president was introduced by Barbara Stoflet of Minnetonka, Minn. Stoflet is a recipient of the Presidential Award for Excellence in Mathematics and Science Teaching who has taught mathematics and science for more than 23 years. She described teachers as "the most fortunate of all who labor," and said that the president "is writing history and reshaping the future for all of us."

Background on the Presidential Awards

The Presidential Award for Excellence in Mathematics and Science Teaching (PAEMST) is a program administered by NSF for the White House. Awards are made annually to outstanding pre-college-level science and math teachers from across the country. The winners are selected by a panel of distinguished scientists, mathematicians and educators following an initial selection process done at the state level. Each year, the award alternates, going either to science and math teachers in grades K through 6 (as it is this year) or to those teaching in grades 7 through 12. For more information on the winners of this award, go to http://www.paemst.org/.

The Presidential Award for Excellence in Science, Mathematics and Engineering Mentoring (PAESMEM) is a program administered by NSF for the White House. Awards are made each year to individuals or organizations in recognition of the crucial role that mentoring plays in the academic and personal development of students studying science or engineering and who belong to minorities that are underrepresented in those fields. Candidates for the presidential mentoring award are nominated by colleagues, administrators and students from their home institutions. The mentoring can involve students at any grade level from elementary through graduate school. For more information on the winners of this award, go to this link.

Recipients of the Presidential Award for Excellence in Science, Mathematics and Engineering Mentoring
(2007 and 2008 competitions)