The Fantastic Armor of a Wonder Snail 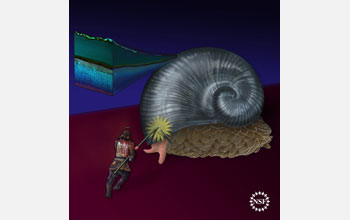 A deep sea mollusc has a coat that protects it from penetration attack.

Deep within the Kairei Indian hydrothermal vent field, two-and-one-half miles below the central Indian Ocean, scientists have discovered a gastropod mollusk, whose armor could improve load-bearing and protective materials in everything from aircraft hulls to sports equipment.

Researchers at the National Science Foundation-supported Materials Research Science and Engineering Center at the Massachusetts Institute of Technology are studying the mollusk's physical and mechanical properties. A report, "Protection mechanisms of the iron-plated armor of a deep sea hydrothermal vent gastropod," appears this week in the Proceedings of the National Academy of Sciences.

The so-called "scaly-foot gastropod," has a unique tri-layered shell that may hold insights for future mechanical design principles. Specifically, it has a highly calcified inner layer, a thick organic middle layer. But, it's the extraordinary outer layer fused with granular iron sulfide that excites researchers.

The Kairei Indian vent field is a series of deep gashes in the planet's surface along a volcanic mountain chain below the Indian Ocean. There, researchers on an expedition discovered the never before seen snail in 1999.

"Hydrothermal vent fluids possess high concentration of sulfides and metals, but this mollusk is unique in that it incorporates materials plentiful to vent field into its shell structure," said MIT project leader Christine Ortiz at MIT's Department of Materials Science and Engineering. "We were interested in looking at the structure and properties of the individual layers and seeing how they behave mechanically," she said noting that the mollusk's organic inner layer is also interesting.

In particular researchers set out to discover what advantages the structure holds for protection against penetrating attacks from predators. Understanding this can give them new ideas for materials that may be used for cars, trucks and military applications.

A number of potential predators were found in the same region as the scaly-foot gastropod. One predator, the cone snail, uses a harpoon-like tooth to attempt penetration of before injecting it with paralyzing venom.  Additionally, sea-faring crabs are known to grab gastropods within their claws and attempt to puncture their shells and/or squeeze them sometimes for days until the mollusks' shells break.

The testing led to a "realization that each layer of the (mollusk's) exoskeleton is responsible for distinct and multifunctional roles in mechanical protection," Ortiz and her colleagues write in the report. The testing reveals that the shell is "advantageous for penetration resistance, energy dissipation, mitigation of fracture and crack arrest, reduction of back deflections, and resistance to bending and tensile loads."

Our study suggests that the scaly-foot gastropod undergoes very different deformation and protection mechanisms compared to other gastropods," said Ortiz. "It is very efficient in protection, more so than the typical mollusk."