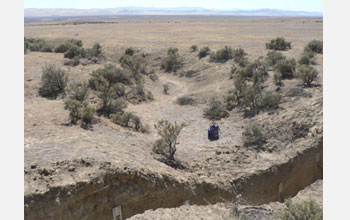 Recent studies of stream channel offsets along the San Andreas Fault reveal new information about fault behavior--changing our understanding of the potential for damaging earthquakes.

The studies were conducted at the Carrizo Plain, 100 miles north of Los Angeles and site of the original "Big One"--the Fort Tejon quake of 1857--by scientists at Arizona State University (ASU) and the University of California at Irvine (UCI).

Applying a systems science approach, the teams report results of a pair of studies in the journal Science Express on January 21st. The results incorporate the most comprehensive analysis of this part of the San Andreas fault system to date.

"The results show a substantially reduced estimate of time between large earthquakes on the south-central San Andreas Fault, which implies more frequent smaller earthquakes than previously believed. This in turn has significant implications for earthquake hazards in southern California."

In one of the studies, ASU geologists Ramon Arrowsmith and Olaf Zielke employed topographic measurements from LiDAR (Light Detection and Ranging), which provided a view of the Earth's surface at a resolution at least 10 times higher than previously available, enabling the scientists to "see" and measure fault movement, or offset.

To study older earthquakes, researchers turned to offset landforms such as stream channels, which cross the fault at a high angle.

"This virtual approach is not a substitute for going out and looking at the features on the ground," says Zielke. "But it is a powerful approach that is repeatable by other scientists."

A team led by UCI's Lisa Grant Ludwig, Sinan Akciz and Gabriela Noriega determined the age of offset features in Carrizo Plain dry stream channels. They studied how much the fault had slipped during previous earthquakes. The distance a fault "slips," or moves, determines its offset.

By digging trenches across the fault, radiocarbon-dating sediment samples, and studying historic weather data for the Carrizo Plain channels, and combining them with LiDAR data, the researchers found something new.

Rather than seeing the same slip repeat in characteristic ways, they found that the slip varied from earthquake to earthquake.

"When we combine our offset measurements with estimates of the ages of these offset features, and the ages of prior earthquakes, we find that the earthquake offset from event to event in the Carrizo Plain is not constant, as is current thinking," Arrowsmith said.

"The idea of slips repeating in characteristic ways along the San Andreas Fault is very appealing, because if you can figure that out, you are on your way to forecasting earthquakes with some reasonable confidence," added Ludwig.

Before these studies, the magnitude 7.8 Fort Tejon earthquake of 1857 (the most recent earthquake along the southern San Andreas Fault) was thought to have caused a nine-to-ten meter slip along the Carrizo Plain.

But the data the teams acquired show that it was actually half as much, and that slip in some of the prior earthquakes may have been even less.

The researchers also found that none of the past five large earthquakes in the Carrizo Plain dating back 500 years produced slip anywhere near nine meters. The maximum slip seen was about five to six meters, which includes the slip caused by the Fort Tejon quake.

This result changes how we think the San Andreas Fault behaves, the researchers say. It probably is not as segmented in its release of accumulated stress as was thought.

This makes forecasting future earthquakes harder because geologists cannot rely on the assumption of constant behavior for each section.

It could mean that earthquakes are more common along the San Andreas, but that some of those events may be smaller than previously expected.

Since the 1857 quake, an approximate five meters of strain, or potential slip, has been building up on the San Andreas fault in the Carrizo Plain, ready to be released in a future earthquake.

In the last five earthquakes, the most slip that has been released was five to six meters in the big 1857 quake. This finding points to the potential of a large temblor along the southern San Andreas fault.

"Our collaboration has produced important information about how the San Andreas Fault works," said Arrowsmith. "I am optimistic that these results, which change how we think about how faults work, are moving us to a better understanding of the complexity of the earthquake process."

"The recent earthquake in Haiti is a reminder that a destructive earthquake can strike without warning," Ludwig said. "One thing that hasn't changed is the importance of preparedness and earthquake resistant infrastructure in seismically active areas around the globe."