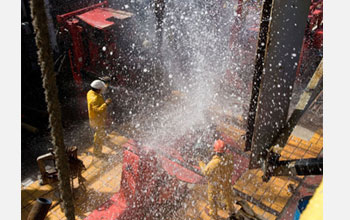 For eight weeks beginning in November 2009, off the coast of New Zealand, an international team of 34 scientists and 92 support staff and crew on board the scientific drilling vessel JOIDES Resolution (JR) were at work investigating sea-level change in a region called the Canterbury Basin. It proved to be a record-breaking trip for the research team.

The JR is one of the primary research vessels of an international research program called the Integrated Ocean Drilling Program (IODP). This research took place during IODP Expedition 317.

At present 10 percent of the world's population lives within 10 meters of sea level. Current climate models predict a 50-centimeter to more than one-meter rise in sea level over the next 100 years, posing a threat to inhabitants of low-lying coastal communities around the world.

To better understand what drives changes in sea level and how humans are affecting this change, scientists are "looking to our past for answers and digging back as far as 35 million years into the Earth's history to understand these dynamic processes," says Rodey Batiza of the NSF's division of ocean sciences.

Another record was broken for the deepest sample taken by scientific ocean drilling for microbiological studies (1,925 meters).

A fourth record was achieved when the team recovered sediment from the shallowest water site (85 meters) ever drilled for science by the JR.

The unstable, sandy composition of the sediments and the relatively shallow water of the shelf environment present unique challenges for a floating drilling platform like the JR, which relies on thrusters to maintain position and requires special technology to accommodate wave motion.

"We never expected we would be able to drill this deep in such a difficult environment," says Fulthorpe.

Canterbury Basin is part of a worldwide array of IODP drilling investigations designed to examine global sea level changes during Earth's "Icehouse" period, when sea level was largely controlled by changes in glaciation at the poles.

Before Canterbury, IODP sea level change studies included sites near the New Jersey coast, the Bahamas, Tahiti, and on the Marion Plateau off northeastern Australia.

Canterbury Basin was selected as a premier site for further sea level history investigations because it expanded the geographic coverage needed to study a global process. It displays similar sequence patterns to New Jersey studies.

Data from both the Canterbury Basin and the New Jersey shelf IODP expeditions will be integrated to provide a better understanding of global trends in sea level over time.

Global sea level has changed in the Earth's past; these changes are influenced by the melting of polar ice caps, which increases the volume of water in the ocean.

Locally, relative sea level can also change as a result of tectonic activity, which causes vertical movement in the Earth's crust.

Together, glaciation and tectonic forces create a complex system that can be difficult to simulate with climate models. This necessitates field studies like the Canterbury Basin expedition, say geologists, to directly analyze samples.

The Canterbury Basin expedition set out to recover seafloor sediments that would capture a detailed record of changes in sea level that occurred during the last 10 to 12 million years, a time when global sea level change was largely controlled by glacial/interglacial ice volume changes.

The research team also recovered samples documenting changes in ocean circulation that began when movements in Earth's tectonic plates separated Antarctica from Australia, creating a new seaway between the two continents about 34 million years ago.

Canterbury Basin is one of the best sites in the world for this type of survey because it is located in a tectonically-active region and therefore has a relatively high rate of sedimentary deposition, which, like the pages of a book, record detailed events in Earth's climate history.

Beyond breaking records, the IODP Canterbury Basin expedition achieved its goal of recovering a 10-million-year record of sea level fluctuations, with one drill hole extending back 35 million years.

Cores revealed cyclic changes in sediment type and physical properties (such as magnetic susceptibility) that are believed to reflect switches between glacial and interglacial time periods.

Understanding the relationship between these seismic "sequences" and global sea-level change is an important objective for post-expedition research, say expedition geologists.

The JR is operated by the U.S. Implementing Organization of IODP, which consists of the Washington, D.C.-based Consortium for Ocean Leadership, Texas A&M University, and Lamont-Doherty Earth Observatory of Columbia University.

Additional program support for the IODP comes from the European Consortium for Ocean Research Drilling (ECORD), the Australian-New Zealand IODP Consortium (ANZIC), India's Ministry of Earth Sciences, the People's Republic of China (Ministry of Science and Technology), and the Korea Institute of Geoscience and Mineral Resources.