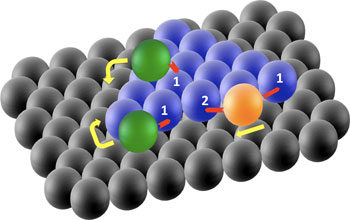 Atoms land on top of each other, creating rough spots on thin films used to produce semiconductors.

Watch a crystal grow in this video.

The quest for faster electronic devices recently got something more than a little bump up in technological knowhow. Scientists at Cornell University, Ithaca, N.Y. discovered that the thin, smooth, crystalline sheets needed to make semiconductors, which are the foundation of modern computers, might be grown into smoother sheets by managing the random darting motions of the atomic particles that affect how the crystals grow.

"The main benefit of smooth crystalline films in electronic devices is that electrons can travel from one place to another in a device with minimal disruption," said Charles Ying, program director in the National Science Foundation's Division of Materials Research. "This in turn leads to faster electronics and lower electricity consumption."

The research is funded in part by the Cornell Center for Materials Research, which is supported by the National Science Foundation. Findings are reported in the Jan. 22 online edition of the journal Science.

Led by assistant professor of physics Itai Cohen at Cornell, researchers recreated conditions of layer-by-layer crystalline growth using particles much bigger than atoms, but still small enough that they behave like atoms.  Similar to using beach balls to model the behavior of sand, scientists used a solution of tiny plastic spheres 50 times smaller than a human hair to reproduce the conditions that lead to crystallization on the atomic scale. With this precise modeling, they could watch how crystalline sheets grow.

Using an optical microscope, the scientists could watch exactly what their "atoms"--actually, micron-sized silica particles suspended in fluid--did as they crystallized. What's more, they were able to manipulate single particles one at a time and test conditions that lead to smooth crystal growth.

"These particles are big and slow enough that you can see what's going on in real time," explained graduate student Mark Buckley. Watching them, researchers discovered that the random darting motion of a particle is a key factor that affects how crystals grow.

While some materials grow smooth crystals, others tend to develop bumps and defects--a serious problem for thin-film manufacturing. Researchers are trying to improve the process at the atomic scale, but a major challenge to growing thin films with atoms is that the atoms often randomly form mounds, rather than crystallizing into thin sheets.

This happens because as atoms are deposited onto a substrate, they initially form small crystals, called islands. When more atoms are dumped on top of these crystals, the atoms tend to stay atop the islands, rather than hopping off the edges. This creates the pesky rough spots, "and it's game over" for a perfect thin film, Cohen said.

Conventional theory says that atoms that land on top of islands feel an energetic "pull" from other atoms that keeps them from rolling off. In the system used for the experiment, the researchers eliminated this pull by shortening the bonds between their particles. But they still saw that their particles hesitated at the islands' edges.

Further analysis using optical tweezers that manipulated individual particles allowed the researchers to measure just how long it took for particles to move off the crystal islands. Because the particles were suspended in a fluid that knocks them about, they exhibited Brownian motion--a random walk of sorts. As the particles move and diffuse from one area to another, the researchers noted that the distance a particle had to travel to "fall" off an island's edge was three times farther than moving laterally from one site on the island to another. Because the particles have to traverse this distance in a Brownian fashion, it can take particles nine times longer to complete the "fall." This difference explained why the researchers still saw a barrier at the island edge.

Atoms on an atomic crystalline film move in a manner similar to the Brownian particles, since the vibrations of the underlying crystal, called phonons, tend to jostle them about. The researchers surmised that in addition to the bonding between the atoms, this random motion may also contribute to the barrier at the crystal's edge, and hence, the roughness of the crystal film.

"If the principles we have uncovered can be applied to the atomic scale, scientists will be able to better control the growth of thin films used to manufacture electronic components for our computers and cell phones," Cohen said.