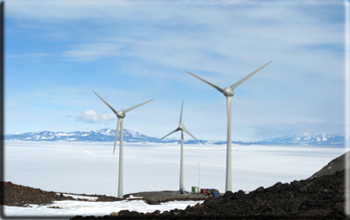 Wind turbines on Crater Hill between McMurdo Station and Scott Base.

On 16 January 2010, U.S. and New Zealand officials held an opening ceremony for a three-turbine wind farm on Ross Island.  Engineers estimate that the wind farm will cut fuel consumption at McMurdo Station and Scott Base by about 240,000 gallons every year.