Scientists Return to Haiti to Assess Possibility of Another Major Quake 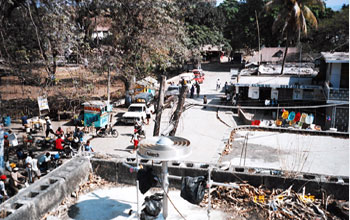 In a pre-earthquake photo, a GPS receiver and antenna sit atop a roof in Port-au-Prince, Haiti.

A team funded by the National Science Foundation (NSF) is returning to Haiti this week to investigate the cause of the January 12, magnitude 7 earthquake there.

The geologists will collect crucial data to assess whether the quake could trigger another major event to the east or west of Port-au-Prince, Haiti's capital.

Eric Calais, a Purdue University geophysicist leading the team, said that most aftershocks occur within weeks of the initial quake and that the team urgently needs to get to the site to make a detailed assessment before crucial geological information disappears.

"The big question is instead of small aftershocks, could there be a bigger earthquake coming," Calais said. "There are many historical examples of an initial earthquake triggering an even larger one along the same or nearby faults. We are concerned for the Dominican Republic, as our preliminary models show that the continuation of the fault in this area is loaded."

"The GPS and geological data gathered by this team will provide important insights into the cause of the January 12, 2010, Haitian earthquake," said Tim Killeen, NSF assistant director for geosciences, "and are essential for evaluating the potential for future earthquakes in the Port-au-Prince area."

The Haitian Bureau of Mines and Energy and the Civil Protection Agency invited Calais and his team back to the country to examine the fault and advise officials as they prepare to rebuild.

"The government needs scientifically informed advice to decide what to do now and in the future when they start thinking about rebuilding," Calais said.

"We know how to do the calculations that will tell us if the likelihood of other earthquakes along the fault has increased, but we need information that we can only get by going to the field, making direct observations, and taking measurements on the ground."

Calais' research team has been tracking the build-up of energy along the Enriquillo and Septentrional Faults on the island of Hispaniola, which includes Haiti and the Dominican Republic, using Global Positioning System technology.

NSF has awarded the team a new grant to find and map the area of the fault that ruptured, resurvey the existing GPS markers, and install 10 new continuous GPS sites to monitor the changes that will occur in the years to come as Earth's crust readjusts.

Technical support for the operation is provided by UNAVCO, the NSF-supported facility for geodesy in Boulder, Colo.

From GPS measurements at the surface, the team can determine what happened along the fault through its full depth 20 kilometers underground.

Precise measurements of this underground movement are critical for validating models of stress changes that can indicate the potential for, and possible magnitude of, future earthquakes, Calais said.

"The shifting stresses in the Earth's crust after a major earthquake can act to effectively clamp or unclamp other faults. If a fault is almost ready to go and the change in stress slightly unclamps it, then it may fail and cause an earthquake," he said.

"We think this is what's causing the current sequence of aftershocks, which is mostly concentrated at the western end of the epicentral area, including the recent magnitude 6 aftershock."

The team also will collaborate with Falk Amelung and Timothy Dixon of the University of Miami to collect satellite radar data to map crustal changes before and after the earthquake.

This information, when combined with the GPS data, will provide the most precise estimate of the earthquake source, a critical starting point for future studies.

"This is an unprecedented opportunity to study a large earthquake at a fault where two tectonic plates meet," Freed said. "What we learn here can be translated to other similar faults throughout the world, such as the San Andreas fault system. Luckily major earthquakes do not occur very often, but that makes this a rare opportunity to learn about the Earth's behavior."

Despite an invitation by the Haitian government and funding from the NSF, getting transportation into Haiti was difficult, Calais said. Members of Purdue's Department of Aviation Technology made arrangements via Aeroservice in Miami for Calais and his equipment to be transported to Port-au-Prince on a cargo plane that will also bring aid and supplies to the country.

"The assistance of my Purdue colleagues is instrumental in getting me to Port-au-Prince," Calais said. "It is not easy to get into the country right now, and we don't want to interfere with what is most important at this time--the ongoing aid and relief efforts."

In addition to the donation of transportation, GPS manufacturer Trimble gave Haiti six GPS receivers, which have been fitted for field operation by UNAVCO and will be deployed by the research group.