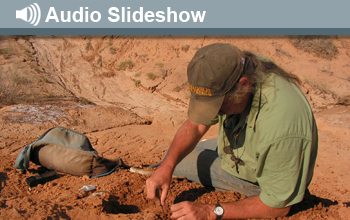 Through an expedition to the Gobi Desert of China, scientists have solved the puzzle of how one group of dinosaurs came to look like birds--independent of birds.

The discovery extends the fossil record of the family Alvarezsauridae--a bizarre group of bird-like dinosaurs with a large claw on the hand and very short, powerful arms--back 63 million years, further distancing the group from birds on the evolutionary tree.

Until now, there was no direct evidence that dinosaurs of this type lived during the Late Jurassic, some 160 million years ago.

"This National Science Foundation (NSF)-supported research sheds light on the poorly understood early evolution of birds in the Late Jurassic in China by eliminating alvarezsaurids as ancestors of the birds," says H. Richard Lane, program director in NSF's Division of Earth Sciences.

"Haplocheirus is a transitional fossil, because it shows an early evolutionary step in how the bizarre hands of later alvarezsaurs evolved from earlier predatory dinosaurs," said Choiniere. "The fossil also confirms our predictions that Alvarezsauridae should have been evolving in the Late Jurassic time period."

The fossil of the new species contains several distinguishing features that link it to Alvarezsauridae, the family of dinosaurs that includes species such as Mononykus (meaning one claw) and that was previously thought to be a flightless offshoot of ancient birds due to skeletal similarities.

Despite the similarity between the skeletons, Choiniere's research demonstrates that the family Alvarezsauridae evolved in parallel to birds and did not descend from them.

The new species shows some of the earliest evolutionary stages in the development of a short, powerful arm with a single functional claw that may have been used for digging termites.

The Late Jurassic is an important time period for bird evolution, as evidence suggests that birds first evolved from theropod dinosaurs at that time.

Paradoxically, fossils of dinosaurs closely related to birds from this time period are extremely rare.

The ten-foot long, nearly complete skeleton of Haplocheirus sollers specimen was found preserved in river-rock in the Xinjiang Autonomous Region of northwestern China, a region well-known for its Late Jurassic fossils.

It was collected during a series of expeditions to Xinjiang co-led by James Clark of GWU and Xu Xing of the Chinese Academy of Sciences, co-authors of the paper.

These expeditions were extremely successful, resulting in the discovery of a small, agile relative of crocodilians (Junggarsuchus sloani); the oldest horned dinosaur (Yinlong downsi); one of the oldest tyrannosaurs (Guanlong wucaii); and several skeletons of an unusual, toothless new ceratosaurian dinosaur (Limusaurus inextricabilis) that were buried while stuck in mud pits.

"The primary goal of our expeditions was to find evidence of the theropod dinosaurs closest to birds, and the discovery of Haplocheirus is one of our major discoveries, said Clark. "This spectacular skeleton shows how the strange arms of Mononykus and other alvarezsaurs evolved from a more typically theropod grasping hand."

Theropod dinosaurs include charismatic meat-eaters like Tyrannosaurus rex but also modern birds. Alvarezsaurs are one of several groups of theropods closely related to birds, including well-known species like Velociraptor.

This research also was funded by the National Geographic Society, the Chinese National Science Foundation and the George Washington University.