Rev Up For "The Science of Speed" 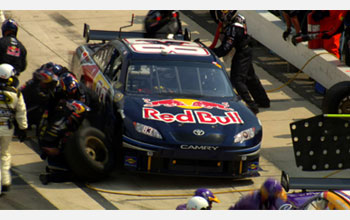 The world of science education has a fast, new teammate: NASCAR, whose 2010 Sprint Cup race season begins in Daytona, Fla. on Feb. 14 with the Daytona 500, the most celebrated stock car race of the season.

A 12-module video series, "The Science of Speed," by project partners the National Science Foundation and NASCAR calls on drivers and engineers from major race teams to take educators and students behind the scenes of NASCAR racing. The series illustrates fundamental science concepts such as friction, safety, sound and other elements of racing at speeds up to 200 miles per hour. The segments help students improve their knowledge of basic science and can be viewed at http://www.nsf.gov/news/special_reports/sos/.

"What better time for science teachers and students to jump in than right now and learn how science makes race cars powerful, agile, fast and safe?" says Jeff Nesbit, director of NSF's Office of Legislative and Public Affairs. He notes that the same principles that affect race cars also affect passenger cars that people drive every day.

That's the idea behind the series--to bring outside-the-classroom examples inside the classroom to teach science in an exciting and relatable way. The videos seek to enhance students' critical thinking and problem solving to address next-generation problems.

Will it work? According to a 2008 ESPN sports poll, 43 percent of adult NASCAR fans have children under the age of 18. Additionally, NASCAR is the second most popular sport on television among children under 18, according to Nielsen Media Research. This group of young people--particularly those ages 13 and above--is the audience that "The Science of Speed" videos are designed to reach.

The Science of Speed made its debut in the spring of 2009. It was produced by Santa Fe Productions, an educational production company headquartered in Albuquerque, N.M., and hosted by Diandra Leslie-Pelecky, a physics professor at the University of Texas at Dallas and author of "The Physics of NASCAR."

NASCAR is the largest sanctioning body of motorsports in the United States. The National Science Foundation is an independent federal agency that supports fundamental research and education across all fields of science and engineering. It's headquartered in Arlington, Va.