Results change scientists' thinking about relationship between evolution and ecology 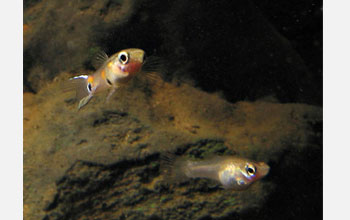 A male and female guppy in a natural stream in Trinidad, site of the recent study.

Biologists have long known that ecology, the interaction between organisms and their environment, plays a significant role in forming new species and in modifying living ones.

The traditional view is that ecology shapes evolution. The environment defines a template for the process of evolution: natural selection shapes organisms to fit that template.

Some studies suggest, however, that evolutionary processes reciprocate by influencing ecology.

Now biologists present evidence that ecology and evolution are indeed reciprocally interacting processes, a fundamental shift in scientists' understanding of the relationship between evolution and ecology.

The results appear this week in the online early edition of the journal Proceedings of the National Academy of Sciences (PNAS).

"By documenting that rapid, adaptive evolution within single species can cause substantial changes in ecosystem structure and function, this study makes a significant contribution to merging ecological and evolutionary theory," said Alan Tessier, program director in the National Science Foundation (NSF)'s Division of Environmental Biology, which funded the research.

NSF supported the research as part of a five-year, multi-investigator grant funded by the Frontiers in Integrative Biological Research (FIBR) initiative.

"Our results represent a first significant step in showing that evolution cannot be ignored when studying ecological interactions," said David Reznick, an evolutionary biologist at the University of California at Riverside (UCR), who led the study.

In earlier work, Reznick demonstrated that guppies, the study organism, can evolve very rapidly. In this new study he and collaborators quantify the ecological consequences of such rapid adaptation.

The scientists compared guppies--small freshwater fish that have been the subject of long-term studies--adapted to two different stream communities in Trinidad.

In the experiments, the researchers collected guppies from the two different communities and quantified their impact on a stream ecosystem by placing them in replicate, artificial streams built alongside a natural stream.

They found that guppies from the two types of fish communities had substantially different impacts--after only four weeks--on the structure and function of their ecosystems.

There also were corresponding differences in how and at what rate nutrients, like nitrogen and phosphorus, were recycled.

The streams with high-predation guppies--guppies from the more diverse fish communities--had less plant production and oxygen consumption, a slower breakdown of leaves that had fallen into the water, and a slower accumulation of the resulting detritus.

The researchers' findings mirrored their observations in guppies across natural streams in Trinidad.

"By doing our experiments in artificial streams we are able to pin down guppies as a likely cause of what we see in natural streams," Bassar said.

"The experiments show that local adaptation causes the evolution of differences in diet, which, in turn, causes differences in ecosystem structure. Our next step is to characterize how this changed ecosystem, in turn, shapes how the guppies adapt to it."