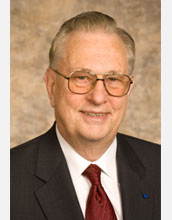 ARLINGTON, VA - Arden L. Bement, the director of the National Science Foundation, has been named to lead Purdue University's new Global Policy Research Institute (GPRI) in West Lafayette, Ind. Bement will begin his new post as the director of GPRI--which will draw on seven different science and research disciplines at Purdue--on June 1 this year.

Bement was appointed to his six-year term as director by President George W. Bush in November 2004. He served as acting director for 10 months prior to this. Under Bement, NSF has seen its budget move onto a doubling path, created a series of new science and engineering initiatives around innovation themes, increased its role in the international scientific policy arena and increased its commitment to core basic research areas. NSF is widely recognized as a key driver of science and innovation advances in the U.S.

During Bement's tenure as NSF director, he oversaw the foundation's annual budget of more than $7 billion that supports the research and education of roughly 200,000 scientists, engineers, educators and students across the United States. As part of the White House's American Competitiveness Initiative in 2006, he guided initiatives that supported the training of the U.S. work force to operate in a high-tech global economy.

"With the submission of his 2011 budget, President Obama has underscored again the critical role that the National Science Foundation plays in ensuring our Nation's continuing preeminence in science and technology," said John P. Holdren, assistant to the president for science and technology and director, Office of Science and Technology Policy. "I want to thank Dr. Bement for his nearly seven years of distinguished service at NSF's helm and his unwavering commitment to America's research and education enterprise."

From 1989 to 1995, Bement also served on the National Science Board, the 24-member policy body for NSF and adviser to the president and Congress on science and engineering issues.

"Arden Bement is a leader in the national and global science community," said Purdue president and National Science Board member France A. Córdova. "He has a tremendous amount of experience in understanding, formulating and shaping policy on critical issues. Policy, whether it's related to economics, agriculture, poverty, climate change or energy sources, is built on research and science aimed at improving people's lives. A dedicated institute is another opportunity for Purdue to strengthen connections between science and society."

Bement holds an engineer of metallurgy degree from the Colorado School of Mines, a master's degree in metallurgical material engineering from the University of Idaho and a doctorate in metallurgical material engineering from the University of Michigan. He has been awarded honorary doctorates from Cleveland State University, Colorado School of Mines, and Case Western Reserve University, and is an honorary member of the graduate faculty of the Chinese Academy of Science. He is a member of the National Academy of Engineering, fellow of the American Academy of Arts and Sciences, and fellow of the American Association for the Advancement of Science. In 2009, he was awarded the Order of the Rising Sun, Gold and Silver Star, by the Emperor of Japan for contributions to international understanding through science and technology.