Winning entries appear in the Feb. 19 issue of Science 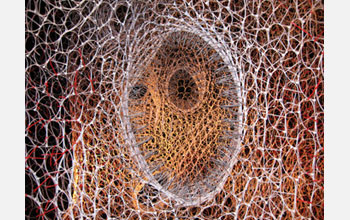 View the 2009 winners and the first place winner of non-interactive media.

The National Science Foundation (NSF) along with the journal Science, published by the American Association for the Advancement of Science (AAAS), today announced the winners of their seventh annual International Science & Engineering Visualization Challenge.

The winning entries include extraordinary photographs, illustrations, videos and graphics that reveal intricate details of life and the world around us--down to the smallest scale. The winning visualizations range from a video that uses found objects to explain the epigenetics of identical twins, to an electron microscope photograph that catches self-assembling polymers in action as they grip a green orb, offering a powerful message about cooperative efforts to save the Earth.

One of two first-place winners in the illustrations category is a 3.5-meter-tall, three-dimensional art installation, one of several projects by biologist Peter Lloyd Jones and architect Jenny E. Sabin of the University of Pennsylvania's Sabin + Jones LabStudio that depict large, complex data sets in new ways. Called "Branching Morphogenesis," the work is an illustration of the forces lung cells exert as they form capillaries. It aims to reveal--through abstraction--the unseen beauty and dynamic relationships that exist between endothelial cells and their surrounding extracellular microenvironment.

"Sometimes graphing data won't tell you about its intricacies," Jones says. "This makes the whole process exciting and interactive." The installation is featured on the cover of the Feb. 19 issue of Science.

Illustrators, photographers, computer programmers and graphics specialists from around the world were invited to submit visualizations that would intrigue, explain and educate. This year, there were 130 entries from 14 countries.

The winning entries communicate information about mathematical theory with a rendering of Kuen's surface; use interactive media to teach high school students about the intricate cycles and pathways that keep the cell alive by generating and burning energy; use video to show how dollar bills can be used to build a complete picture of how people move from place to place in the United States; and more. The Feb. 19 issue of Science features the winning entries, which will also be freely available with registration, at http://www.sciencemag.org/special/vis2009/ and the NSF's Web site at www.nsf.gov/news/scivis.

The 2009 winning entries appear below in the following five categories:

Michael P. Zach, University of Wisconsin - Stevens Point
Microbe vs. Mineral - A Life and Death Struggle in the Desert

Richard Palais and Luc Benard, University of California at Irvin
Kuen's Surface: A Meditation on Euclid, Lobachevsky, and Quantum Fields.

Mario De Stefano, Antonia Auletta, and Carla Langella, The 2nd University of Naples
Back to the Future