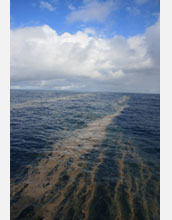 Marine scientists long believed that a microbe called Trichodesmium, a member of a group called the cyanobacteria, reigned over the ocean's nitrogen budget.

New research results reported on-line today in a paper in Science Express show that Trichodesmium may have to share its nitrogen-fixing throne: two others of its kind, small spherical species of nitrogen-fixing cyanobacteria called UCYN-A and Crocosphaera watsonii, are also abundant in the oceans.

One of them, UCYN-A, is more widely distributed than Trichodesmium, and can live in cooler waters.

Different nitrogen-fixing cyanobacteria, scientists have discovered, have varying preferences for water temperature and other environmental factors.

Pia Moisander and Jon Zehr of the University of California at Santa Cruz and their co-authors showed that actively nitrogen-fixing UCYN-A "can be found in great abundance at higher latitudes and deeper waters than Trichodesmium," says Moisander.

"Where Trichodesmium might be thought of as a warm-water microbe, UCYN-A likes it cooler," says Zehr. "This has far-reaching implications for the geographic distribution of the ocean's 'nitrogen fixers,' and for the process of nitrogen fixation itself."

According to co-author Joseph Montoya of the Georgia Institute of Technology, "we're now beginning to develop an appreciation for the biogeography of marine nitrogen fixation, and the broad range of oceanic habitats where nitrogen fixation makes a significant contribution to the overall nitrogen budget."

Most previous estimates of global nitrogen fixation were based on distributions of or factors that control the growth of Trichodesmium.

"The results of this study," says David Garrison, program director in the National Science Foundation (NSF)'s Directorate for Geosciences, "show that these novel microbes are found in the world's oceans in a distribution analogous to that of non-nitrogen-fixing cyanobacteria, which are widespread."

The research was also supported by NSF's Directorate for Biological Sciences and an NSF Science and Technology Center called C-MORE, the Center for Microbial Oceanography: Research and Education.

Trichodesmium, as well as UCYN-A and Crocosphaera watsonii, "fix" nitrogen in the seas, taking nitrogen gas from the air we breathe and converting it to chemical forms that other microorganisms can use to power their cellular machinery.

Nitrogen-fixing microorganisms are the key to the productivity of the oceans. Growth of microbes at the base of the food chain is dependent on nutrients like nitrogen, in the same way that agriculture on land depends on such nutrients.

Microorganisms that fix nitrogen play a central role, says Zehr, in the "vertical downward flux of organic matter to the deep ocean."

Life forms that are among our planet's smallest, he says, play a very large role. Through a series of steps in the nitrogen fixation process, they sequester carbon from the atmosphere, important in controlling Earth's climate.

The research received additional funding from the Gordon and Betty Moore Foundation.