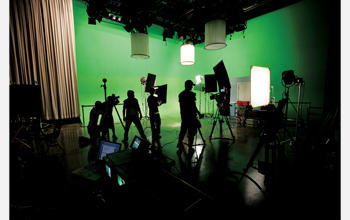 A USC production area is shown.

A major government research agency and a renowned cinematic arts school announced on Feb. 19 that they will combine talents to forge collaborations between researchers and entertainment scholars to produce cutting-edge materials that inspire and inform mass-media audiences about science and engineering concepts. It is the first program to link a federal science agency with an academic leader in the field of entertainment and interactive media.

The National Science Foundation (NSF) and the University of Southern California School of Cinematic Arts (SCA) announced their intentions at the annual meeting of the American Association for the Advancement of Science, whose theme was "Bridging Science and Society."

"This novel and creative partnership will enlist the power of the entertainment media to inspire audiences to learn more about science and engineering, to develop a network of scientific experts, facilities, and instruments available to the arts, and bring new technologies in sight, sound, and video to the marketplace," said Thomas Kalil, deputy director for policy in the White House Office of Science and Technology Policy, in a statement.

"This partnership will support initiatives already announced by President Obama as part of his 'Educate to Innovate' campaign to motivate and inspire students to excel in science, technology, engineering and mathematics," Kalil said.

Operating as the "Creative Science Studio," or CS2, and based at USC's downtown Los Angeles campus, the partnership aims to:

"This alliance is a vital and essential one," said Dean Elizabeth M. Daley. "I'm excited for a potential symbiosis between these two institutions, which will play a major role in the ongoing evolution of scientific communication for both researchers and storytellers."

Founded in collaboration with the Academy of Motion Picture Arts and Sciences in 1929, SCA features soundstages, animation facilities, post-production suites, mixing theaters, screening rooms and all-digital classrooms. Faculty members work professionally as directors, editors, writers, producers, sound designers, lighting artists, animators and in many other roles. They contribute to projects ranging from box-office blockbusters to independent films, broadcast and cable television hits, interactive games and other new media. Since 1973, not a year has passed without an SCA graduate being nominated for an Emmy or Academy Award.

As the federal government's primary science research agency with an annual budget of nearly $7 billion, NSF is the funding source for approximately 20 percent of all federally supported basic research conducted by America's colleges and universities. NSF supports science and engineering at universities, laboratories and field sites all over the United States and throughout the world.

The Creative Science Studio is an outcome of ongoing activities of NSF's Office of Legislative and Public Affairs (OLPA) to enhance relationships between NSF-supported researchers and entertainment scholars and professionals as part of its mission to communicate science to broad public audiences.

"Through our activities we hope audiences of all types will learn that science can be entertaining and not has hard as they think if it's explained in an engaging way," said OLPA Director Jeff Nesbit.

The Creative Science Studio is currently planned to begin operation in the fall of 2010. More information is available at http://uscnews.usc.edu/university/shooting_for_science_literacy.html.