Dome Away From Home 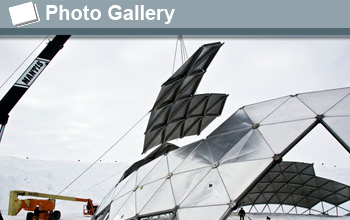 After more than three decades of service to researchers and staff stationed at the bottom of the world, the dome at the Amundsen-Scott South Pole Station was deconstructed this austral summer.

The dome provided a platform for countless scientific discoveries in astronomy, physics, climatology, and other fields, and it also provided a home away from home for the station's 'winter over' crew during 8 months at the station during the austral winter, much of the time in darkness. The dome could no longer accommodate the demands of research activities taking place there, however, and each year the structure sunk deeper into the ice it was built on. Blowing snow that collected on top of it had to be removed and hauled away, burning up precious fuel and crew time during the short austral summer. The international treaty that governs human activities in Antarctica requires that buildings and equipment no longer in use be removed and the site remediated whenever possible, necessitating the dome's deconstruction and removal.

Designed and constructed by the Seabees--the construction battalions of the U.S. Navy--in the early 1970s, the dome's geodesic design provided a unique solution to the challenges posed to engineers trying to build structures at the South Pole. The dome was sufficiently strong to withstand the weight of snow that would blow onto it, and its round shape helped deflect the fierce winds that blow almost constantly at the site. Because the dome needed no internal columns, it provided a wide and flexible space inside, where it protected buildings housing researchers and support staff, as well as laboratories, supplies, and other necessities from the harsh polar environment outside.

The dome was designed to be flown to the South Pole with relative ease in small pieces and then assembled using a system of struts, bolts and gusset plates. While construction at the South Pole is never easy, this simplicity in design helped the Seabees erect the dome and helped personnel from the U.S. Antarctic Program deconstruct it over the past few months with the assistance of some individuals involved in the dome's construction.

The National Science Foundation has replaced the dome with a state-of-the-art research facility that will serve science for the coming decades.

After so many years of service to science in the harshest place on Earth, the dome is being returned to southern California where it will be held in storage. The top sections of the dome have been specially preserved so that they can be re-assembled for a possible exhibit in a new U.S. Navy Seabees museum.