A broad look at the evidence for a dinosaur-killing impact 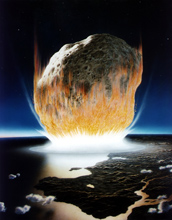 An artist's rendering of the moment of impact at the end of the Cretaceous.

View a webcast of Kirk Johnson from the Denver Museum of Nature & Science.

For decades, scientists have accumulated ever-larger datasets that suggest an enormous space rock crashed into the ocean off the Yucatan Peninsula more than 65 million years ago, resulting in the Cretaceous-Paleogene (K-Pg) extinction.

Recent research, supported in part by the National Science Foundation (NSF), suggested that the impact could have occurred 300,000 years prior to the K-Pg extinction, and that another cause--perhaps a second impact, or the long-lasting volcanic activity at the Deccan Traps in what is now India--drove numerous plant and animal species to their end.

Now, an interdisciplinary team of 41 scientists from 12 nations, also supported in part by NSF, has prepared a paper to specifically counter the volcanic and dual-impact alternatives, a comprehensive review of the multiple, global lines of evidence linking a single impact near what is now Chicxulub, Mexico, to the timing and breadth of the K-Pg extinction.

The researchers, led by Peter Schulte of the University of Erlangen-Nuremburg, present their findings in the March 5, 2010, issue of Science.

"We felt it important to present the wealth of data now available about the remarkable and exact correlation between the impact in the Yucatan and the extinction event at the K-Pg boundary," said University of Texas geophysicist Sean Gulick, one of the authors on the paper.

One factor that is not in dispute: the end of the Cretaceous 65.5 million years ago was marked by one of the most devastating extinctions our planet has faced. The most famous victims were the dinosaurs (their avian relatives notwithstanding), but the event also saw the loss of all flying reptiles, most marine reptiles, more than half of land plants and insects, and hosts of other terrestrial and marine organisms--50 to 70 percent of all species on Earth.

As with all mass extinctions, paleontologists have long asked why so many organisms disappeared so quickly. The cause, or causes, would have to influence a large swath of the planet, on land and sea, and would have to reflect observations in the geological record.

As referenced in the new Science paper, one of the key arguments for impact is a well-studied clay layer that appears at K-Pg boundary sites across the globe, usually in association with melt-glass remnants, shocked minerals, and other materials generated by impacts. The authors point out that the layer thickness and the abundance of impact materials both increase systematically with proximity to the Chicxulub crater.

Until 1980, none of the K-Pg boundary sites was linked to an impact. It was not until physicist Luis Alvarez and his son, geologist Walter Alvarez, took a closer look at a thin and unusual clay layer at K-Pg boundary sediments in Italy that the researchers realized the source might be extraterrestrial.

Within the layer--which the current paper now references to at least 350 sites around the world--the researchers found high levels of iridium. The heavy element is not normally found in high concentrations at Earth's surface, but it is highly concentrated in undifferentiated solar system material, like asteroids and comets.

Since that initial discovery, further studies by a number of teams--some of which are represented in the Science paper--uncovered more impact evidence within the clay, including the spherules of altered melt-glass and impact-shocked minerals.

"This clay layer--with evidence for it being impact in origin--is found at every well-preserved K-Pg boundary site in the world, showing a truly global event," added Gulick.

Additional studies, both in the field and in laboratory simulations and models, led to a growing consensus in support of the impact hypothesis. As it currently stands, the extinction resulted from the collision of a space rock roughly 10 kilometers in diameter into carbon- and sulfur-rich rocks beneath what is now Chicxulub, Mexico, yielding a crater that is more than 180 kilometers in diameter; regional tsunami, earthquakes and fires; extended (but not total) darkness; cooling temperatures and acid rain.

"The impact event triggered tsunami many times the size of the wave that hit the Indian Ocean on Dec. 26, 2004," said marine geologist Tim Bralower of Penn State University, another of the paper's authors. "These waves caused massive destruction on the sea floor, with the multiple sediment layers representing the deposition of impact-derived material, mixed with sand and silt, by waves and currents over periods of days after the impact. As the energy levels gradually decreased, the materials settling down gradually became finer."

In some sites close to the impact, around the Gulf of Mexico and the Caribbean, there are two spherule-bearing layers, at times separated by sediment a few meters thick, and some of the recent controversy stems from this apparent duality. The lower layer consists of coarser particles including spherules and shocked minerals, and the upper layer consists of finer particles and has a higher iridium content.

"Reports of multiple horizons with elevated iridium concentrations fairly close to the Chicxulub crater have led to a lot of confusion, and suggestions of multiple impacts," said fellow author Greg Ravizza, a marine and environmental geologist at the University of Hawaii at Manoa. "A key point that cannot be ignored is that data from several sites far away from the Chicxulub crater provide no evidence of multiple large impacts. This observation lends very strong support to the careful stratigraphic synthesis in our paper demonstrating the very complex, and frequently disturbed, character of the sections closest to the Chicxulub crater."

An impact the size of the Chicxulub event would release large amounts of water, dust and gasses into the atmosphere, temporarily changing climate. While dust alone would not have been able to cause a global winter, tiny carbonate particulates and soot may have amplified the impact's cooling effects.

An estimated 100-500 gigatons of sulfur was also released, contributing to devastating acid rains on land and in the oceans, and producing sunlight-absorbing sulfur aerosols that may have further cooled the Earth for several years.

Because deep ocean temperatures were largely unaffected, the researchers suggest that the climate recovered relatively rapidly. Such a brief transition is in contrast to the centuries-long influx of material into the atmosphere that would result from volcanic activity. Despite the enormity of the Deccan Traps volcanism, sulfur release, for example, might not surpass one half of a gigaton in a year.

At the slower pace of volcanism, organisms would have more time to react, and climatic changes may have approached 2 degrees Celsius of warming, as opposed to cooling.

"The Chicxulub impact was an extremely rapid perturbation of the Earth's ecosystems, at a scale greater than that of any single volcanic event at the time, or of any other impact known since life became prevalent on Earth," added Gulick. "The rate of change and scale of the effects were clearly the cause of the mass extinction at the end of the Cretaceous."

Additionally, the boundary between the end of the Cretaceous and the start of the Paleogene is marked by clear changes in the plants and animals that existed, a change that is not gradual. Species across the globe showed either extinction or major changes in abundance.

Darkness would have severely affected photosynthesis for ocean micro-organisms, eliminating the base for numerous food chains. As a result, the geologic record shows preferential extinction of organisms in food chains relying on plankton as a food source, and preferential survival for organisms in food-chains relying on a foundation of detritus and decayed matter. Many of the organisms that survived were also smaller, indicating survival was dependent on the ability to subsist on limited resources.

"As with the ocean, land-based ecosystems showed the same pattern of greater impact on food chains dependent on live plants," said paleobotanist Kirk Johnson of the Denver Museum of Nature & Science, another author on the paper. "All large, land animals perished. The survivors included groups of animals who either lived in rivers, streams, and lakes or who were small or lived in burrows. Forests were destroyed globally and the earliest Paleogene landscape was covered by ferns, a type of plant that can grow directly from spores--as opposed to conifers and flowering plants that require pollen to interact with a living plant for reproduction."

Across ecosystems, the Paleogene also marks a rapid radiation of new species filling in empty ecological niches, a process that would be unlikely following a more gradual extinction. Such biological evidence, the authors assert, matches best to an impact scenario, corroborating the evidence from the geologic record.

"I think it is likely that Deccan volcanism did have a global effect on Earth's climate, but several hundred thousand years before the end Cretaceous mass extinction," added Ravizza. "Clear evidence demonstrating massive volcanism right at the mass extinction horizon is lacking. While it may be tempting to make this connection, existing data constraining the timing and duration of volcanism just don't support the idea."

According to the authors, no alternative theory yet proposed addresses the global distribution of evidence for the Cretaceous-Paleogene extinction, nor does any other theory clearly present mechanisms that could have led to such abrupt and complete biotic changes.

"The precise correlation of this huge impact crater with a worldwide layer of impact debris--one that lies directly above the extinction level of both marine and land animals and plants--is one of the most phenomenal discoveries in Earth history," said Johnson. "The science is complex, but the story is simple: a single asteroid impact caused global extinctions at the K-Pg boundary."

H. Richard Lane, program director within the Earth Sciences Division at NSF has helped support the work of both research teams. "This ongoing exchange between two groups of scientists has fostered spirited community dialogue around an issue that is riveting to an engaged public," added Lane. "It feeds the appetite of a science-starved audience, and can only benefit science as a whole, while improving the public's understanding of how science progresses."

NOTE: Coincidental to the Science paper, Bralower has co-authored a paper in the March issue of Nature Geoscience that provides new details about the impact evidence revealed by nanofossils in Cretaceous-Paleogene boundary sediments.  For more information, see the Penn State University press release.