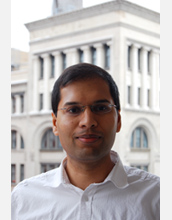 The National Science Foundation (NSF) is pleased to announce the selection of New York University's Subhash Khot, an associate professor at the Courant Institute of Mathematical Sciences, to receive its 2010 Alan T. Waterman Award. Considered the NSF's most prestigious honorary award since its establishment in 1975, this honor is given annually to an outstanding researcher under the age of 36 in any field of science and engineering supported by NSF. The honor includes a grant of $500,000 over three years for scientific research or advanced study in the recipient's field of science. Khot, a theoretical computer scientist, works in an area called "Computational Complexity" which seeks to understand the power and limits of efficient computation.

"Subhash Khot is a gifted and ambitious young scientist," said NSF Director Arden L. Bement, Jr. "He courageously tackles some of the most challenging computational problems, all the while advancing computer security, with vast consequences for the broader security of our personal identities, commercial interests, societal institutions ... even for national security as a whole."

Jeannette Wing, assistant director for NSF's Computer & Information Science & Engineering (CISE) directorate, further described his contributions: "Subhash is a brilliant theoretical computer scientist, and is most well known for his Unique Games Conjecture. He has made many unexpected and original contributions to computational complexity and his work draws connections among optimization, computer science and mathematics."

A fundamental phenomenon in computer science is the existence of computational problems that cannot be quickly solved. These "computationally intractable" problems, as they are called, present far-reaching consequences. For instance, they limit our ability to use mathematics to tackle large-scale problems arising in science and engineering, such as the optimal design of protein folding. Conversely, they make computer security possible as computational intractability thwarts hackers' attempts to access personal information stored in online databases. Understanding and addressing this phenomenon, therefore, has huge potential benefits for science and engineering. Khot has made significant inroads to identifying computational intractability. He has uncovered a problem about probabilistic games called "the Unique Games Problem." His work shows that it lies at the core of a variety of intractable computational problems.

Khot has a long relationship with NSF, and an even longer history receiving awards. He received an NSF CAREER Award, a Sloan Foundation Fellowship, and a Microsoft New Faculty Fellowship. With his colleagues at New York University, Princeton, Rutgers University, and the Institute for Advanced Study, he is part of a $10 million NSF "Expeditions in Computing" grant under which the researchers are seeking to bridge fundamental gaps in our understanding of computational intractability.

Khot earned a bachelor's degree from the Indian Institute of Technology, Bombay in 1999, and a doctorate in computer science from Princeton University in 2003.

Khot will be presented the Waterman Award on the evening of May 4, 2010 at a dinner ceremony to be held in Washington, D.C., at the U.S. Department of State. Further details will be forthcoming.