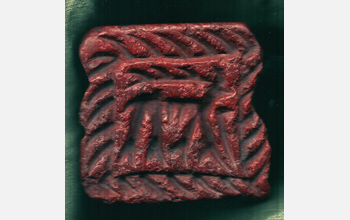 Stone seals like this one were used to mark ownership of goods among Tell Zeidan's social elite.

View a video narrated by Gil Stein, lead researcher and director of the University of Chicago's Oriental Institute.

A team of archaeologists from the University of Chicago's Oriental Institute, along with a team of Syrian colleagues, is uncovering new clues about a prehistoric society that formed the foundation of urban life in the Middle East prior to invention of the wheel.

The mound of Tell Zeidan in the Euphrates River Valley near Raqqa, Syria, which had not been built upon or excavated for 6,000 years, is revealing a society rich in trade, copper metallurgy and pottery production. Artifacts recently found there are providing more support for the view that Tell Zeidan was among the first societies in the Middle East to develop social classes according to power and wealth.

Tell Zeidan dates from between 6000 and 4000 B.C., and immediately preceded the world's first urban civilizations in the ancient Middle East. It is one of the largest sites of the Ubaid culture in northern Mesopotamia.

Thus far, archaeologists have unearthed evidence of this society's trade in obsidian and production and development of copper processing, as well as the existence of a social elite that used stone seals to mark ownership of goods and culturally significant items.

"The project addresses questions not only of how such societies emerged but how they were sustained and flourished," said John Yellen, program director for archaeology in the National Science Foundation's (NSF) Social, Behavioral & Economic Sciences directorate. NSF supports the University of Chicago's research.

Covering about 31 acres, Tell Zeidan was situated where the Balikh River joins the Euphrates River in modern-day Syria. The location was at the crossroads of major, ancient trade routes in Mesopotamia that followed the course of the Euphrates River valley. The Ubaid period lasted from about 5300 to 4000 B.C.

"This enigmatic period saw the first development of widespread irrigation, agriculture, centralized temples, powerful political leaders and the first emergence of social inequality as communities became divided into wealthy elites and poorer commoners," said Gil Stein, director of the Oriental Institute and a leader of the expedition.

"The research also is important because it provides insight into how complex societies, based on linkages which extended across hundreds of miles, developed," said Yellen, noting the distance travelled for raw materials needed for many of the Tell Zeidan artifacts.

For example, copper ore was carried by workers from sources near modern-day Diyarbakir, Turkey, about 185 to 250 miles away, then smelted at Tell Zeidan to produce metal tools and other implements.

One of the most remarkable finds was a stone stamp seal depicting a deer, Stein said. The seal was about two inches by two-and-a-half inches and was carved from a red stone not native to the area. A similar seal design was found 185 miles to the east near Mosul in northern Iraq.

"The existence of very elaborate seals with near-identical motifs at such widely distant sites suggests that in this period, high-ranking elites were assuming leadership positions across a very broad region, and those dispersed elites shared a common set of symbols and perhaps even a common ideology of superior social status," said Stein.

Stein said the location's potential for further discoveries is so great the project is likely to last for decades.