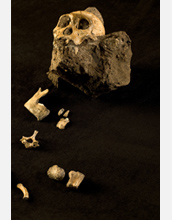 The discovery is described in two papers published in this week's issue of the journal Science. The international research team was led by Lee Berger of the University of Witwatersrand, South Africa.

The first paper describes the fossils as representing a new species of hominid, called Australopithecus sediba, which appears to be a transitional form between the more ape-like species Australopithecus and early members of the genus Homo that includes modern humans--Homo sapiens.

The second paper describes the geological context of the landscape on which the hominids lived near Johannesburg, South Africa. The fossils, a juvenile male and an adult female, were found there at the recently discovered Malapa site in an area known as the Cradle of Humankind, a World Heritage Site.

"This is one of the richest fossil sites in Africa, and we want to understand the environment these early hominids lived in," said Daniel Farber, an earth scientist at the University of California at Santa Cruz (UCSC), and a co-author of the second paper. "The geologic analysis is also important for directing future efforts to find other fossils."

With funding from the National Science Foundation, Farber, who holds joint positions at UCSC and the Lawrence Livermore National Laboratory, led a project to understand how the landscape has changed since the remains were fossilized.

The site contains a complex of limestone caves where many important fossils of early hominids have been found.

The sedimentary and geological context of the new find indicates that the two hominids died around the same time, shortly before a debris flow carried them to their place of burial. The fossils were found near the surface in the remains of a deeply eroded cave system.

Scientists used a combination of dating techniques to determine that the rocks encasing the fossils are 1.95 to 1.78 million years old.

The hominids were found along with a wide range of other animals, including saber-tooth cats, hyena, wild dog, wild cat, kudu, horse and other smaller animals.

Many of the fossil skeletons are intact and well preserved, suggesting they were trapped in the cave where they could not be reached by scavengers.

"We believe the cave originally was deep and only accessible through vertical entrance ways, which made it hard for animals to escape once they became trapped," Farber said.

Dating of selected land surfaces around the fossil site allowed Farber to quantify the erosion rate of the land surface.

"He used the powerful technique of cosmogenic nuclides--isotopes produced by cosmic rays as they reach Earth--to infer how the landscape surrounding Malapa had eroded, and hence what the topography and the hominids' environment would have been," said Enriqueta Barrera, program director in NSF's Division of Earth Sciences, which funded Farber's research.

With the position of the cave near the base of a valley, this indicates that at the time the animals were trapped, the cave would likely have been over 30 meters or about 100 feet deep.

"We are looking at very eroded and denuded portions of this cave system, where nature has exposed what had once been the deep reaches of the caves," said Farber.

"People searching for fossils used to look for openings to caves, because they thought the landscape had not changed much, but now we know that cave deposits can be found at the surface," he said.

Important features of the A. sediba fossils include a small brain and long arms, which make the species similar to other members of the genus Australopithecus. The pelvis and hip are more advanced, however, approaching the hip structure of Homo erectus, indicating that A. sediba was able to walk upright in a striding manner. Their legs are relatively long and their ankles seem to be intermediate between modern humans and earlier hominids.

Because of these and other transitional traits, the researchers believe A. sediba is a convincing candidate for the immediate ancestor to the genus Homo.

Another important aspect of the find is that the juvenile male and adult female were found together. Analysis of the teeth indicate that the young male was about 12 years old, while the adult female was in her late 20s or perhaps even older.

Although researchers can only speculate on how they met their fate, Farber said they probably fell into the cave. "Even now, there are places where you can fall into unexpected cracks in this landscape," he said.

The discovery came about as Berger began a major exploration project to map all of the known fossil sites in the Cradle of Humanity.

An important component of the project, led by geologist Paul Dirks of the University of Witwatersrand, was to thoroughly study the geology of the area. Dirks assembled an international team of scientists, including Farber.

"We immediately focused on this discovery," said Farber, "but we are still interested in the broader issues of what the landscape was like."

What was the environment that favored moving out of the trees to a bipedal form? What were the ecological niches they took advantage of?

"Those were the original questions that we will continue to look at as part of the broader study," Farber said.