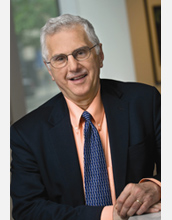 Bruce M. Alberts was named the recipient of the 2010 Vannevar Bush Award, presented by the National Science Board (NSB), in recognition of his lifetime contributions to the United States in science and technology.

"We are pleased to recognize Bruce for his dedication to the creativity, openness and tolerance that define science, passion for improving the human condition and transformational and inspirational leadership in science education, international capacity building and the tireless pursuit of a scientific temperament for the world," said Steven Beering, NSB Chairman.

The Vannevar Bush Award honors truly exceptional, lifelong leaders in science and technology who have made substantial contributions to the welfare of the nation through public service activities in science, technology and public policy. The award was established in 1980 in memory of Vannevar Bush, who served as science advisor to President Franklin Roosevelt during World War II, helped to establish federal funding for science and engineering as a national priority during peacetime and was behind the creation of the National Science Foundation (NSF).

"Many of my personal heroes of science have previously received the Vannevar Bush Award and it is, of course, an enormous privilege for me to join them," said Alberts. "In this era of instantaneous, infinite information everywhere, it has become critical to our survival that a scientific way of analyzing problems, based on evidence and logic, become much more dominant around the globe. Those of us who are scientists thus have enormous challenges before us: challenges that will require that we expand our view of science and its role in society."

Alberts is a prominent biochemist with a strong commitment to the improvement of science education, and currently serves as editor-in-chief of the journal Science and as a United States science envoy. Alberts is also professor emeritus in the department of biochemistry and biophysics at the University of California, San Francisco, to which he returned in 2005 after serving two six-year terms as the president of the National Academy of Sciences in Washington, D.C.

During his tenure at the National Academies, Alberts was instrumental in developing landmark National Science Education Standards that have been implemented in school systems nationwide. "The type of science as inquiry teaching we need," said Alberts, "emphasizes logical, hands-on problem solving, and it insists on having evidence for claims that can be confirmed by others. It requires work in cooperative groups, where those with different types of talents can discover them--developing self-confidence and an ability to communicate effectively with others."

Alberts is also one of the original authors of The Molecular Biology of the Cell, a preeminent textbook now in its fifth edition. For the period 2000 to 2009, he served as the co-chair of the InterAcademy Council, a new organization in Amsterdam governed by the presidents of 15 national academies of sciences and established to provide scientific advice to the world.

Committed in his international work to the "promotion of the creativity, openness and tolerance that are inherent to science," Alberts says that "scientists all around the world must now band together to help create more rational, scientifically-based societies that find dogmatism intolerable."

Widely recognized for his work in the fields of biochemistry and molecular biology, Alberts has earned many honors and awards, including 16 honorary degrees. He currently serves on the advisory boards of more than 25 non-profit institutions, including the Gordon and Betty Moore Foundation, and the Lawrence Berkeley National Laboratory.

Alberts, the 32nd recipient of the Vannevar Bush Award, will be honored at the NSB Annual Awards Dinner at the U.S. Department of State in Washington, DC on May 4, 2010. Three additional award recipients will also be honored that evening: Nalini Nadkarni of The Evergreen State College with the individual NSB Public Service Award, the Expanding Your Horizons Network with the group NSB Public Service Award, and Subhash Khot of New York University with the NSF Alan T. Waterman Award.

The NSB is the 25-member policymaking body for the National Science Foundation and advisory body to the President and Congress on science and engineering issues. Drawn primarily from universities and industry, and representing a variety of science and engineering disciplines and geographic areas, NSB members are selected for their eminence in research, education, or public service, and records of distinguished service. The NSB has 24 members who serve six-year terms. The 25th member is the NSF Director, an ex officio member of the NSB. More information is available on the NSB Web site.