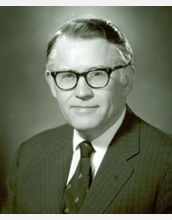 We at the National Science Foundation are mourning the loss of Guy Stever, who died on April 9, at the age of 93. A former NSF director, as well as science advisor to Presidents Nixon and Ford, Dr. Stever was a key figure in twentieth century science.

As director of NSF in the early 1970s, Dr. Stever strengthened the agency's highest priority mission as supporter of basic research, conducted primarily in universities by peer-reviewed principal investigators. In addition, under his leadership a secondary NSF role emerged, resulting from the OPEC Oil Embargo of 1973. He rapidly increased NSF's non-fossil and renewable energy sources research, later transferred to the Energy Research and Development Administration and the Department of Energy. During the same period, NSF's growing biological and social science activities were separated from the physical and mathematical sciences into an independent division.

While serving as President Ford's science advisor, Dr. Stever helped convince President Ford to re-establish a White House science structure, and Ford directed him to work with Vice President Rockefeller, Congress and the Office of Management and Budget toward that end. The 1976 S&T Act created the office of the Science and Technology Policy (OSTP), with the President's science advisor as director. OSTP's charge included addressing newly emerging issues such as loss of international competitive strength.

Dr. Stever also served as former chief scientist of the U.S. Air Force, past president of Carnegie Mellon University, professor at MIT for 20 years and member of the National Academies of Sciences and Engineering. In addition, he served on the board of directors for several private-sector organizations.

On a personal note, Dr. Stever was a close friend. He and I worked closely together when I was a vice president at TRW, Inc., and Dr. Stever served on the TRW Board. I will always be deeply grateful for his friendship over the years, and I will miss him greatly.

We extend our sympathies to his family, colleagues and community.