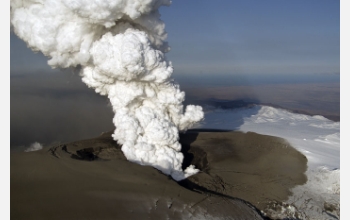 The eruption in Iceland after it penetrated Eyjafjallajökull's icecap; new ash covers the glacier.

Glaciovolcanoes, they're called, these rumbling mountains where the orange-red fire of magma meets the frozen blue of glaciers.

Iceland's Eyjafjallajökull volcano, which erupted recently, is but one of these volcanoes. Others, such as Katla, Hekla and Askja in Iceland; Edziza in British Columbia, Canada; and Mount Rainier and Mount Redoubt in the U.S., are also glaciovolcanoes: volcanoes covered by ice.

"When an ice-covered volcano erupts, the interplay among molten magma, ice and meltwater can have catastrophic results," says Sonia Esperanca, program director in the National Science Foundation (NSF)'s Division of Earth Sciences, which funds research on glaciovolcanoes.

In Iceland last week, scientists were well prepared for the floods, called "jökulhlaups," that can happen after a glaciovolcano blows and melts its glacial covering. The floods were followed by tons of ash ejected into the atmosphere.

Most of the rest of the world, however, was unaware that an eruption from a small, northern island in the middle of the Atlantic Ocean could freeze air transportation and stop global commerce in its tracks.

That, say NSF-funded scientists Ben Edwards at Dickinson College and Ian Skilling at the University of Pittsburgh, is the nature of glaciovolcanoes.

They're working at Mt. Edziza in British Columbia, Canada, and in Iceland to find out how glaciovolcanic deposits--rock fragments strewn for miles after an ice-covered volcano erupts--are formed.

Volcano-ice interaction presents unique types of hazards, say the geologists, but what's left behind after an eruption can also serve as a window into our geologic past.

Studies of glaciovolcanoes' deposits are helping scientists get a better handle on Earth's long-term climate cycles. The volcanic shards are "proxies" for climates of the past.

A key to using these rocks as proxies is the ability to correctly interpret fragmentation of lava and other textural and chemical features. From these, scientists estimate snow and ice thicknesses before and during a glaciovolcano's eruption. The quantity of ash and flowing lava changes as the eruption progresses, until magma stops being formed.

Glaciovolcanic deposits are identifiable long after an eruption ends. Pillow lava, for example, which usually forms on the ocean floor, is sometimes found high atop mountains in British Columbia and Iceland, and in the Antarctic.

These round tubes of fossilized lava, coated with shiny black volcanic glass, are indications of volcanoes that once erupted beneath ice or water.

By noting the elevation of pillow lavas on mountains or high ridges, geologists can better determine the thickness of surrounding ice.

"Pillow lavas might well be forming right now in the ice-bound caverns on top of Eyjafjallajökull," says Edwards. "By analyzing the gas content dissolved in pillow lavas' glass, we can also estimate the thickness of the overlying ice at the time of their formation."

When hot lava melts ice quickly, water can mix with magma, flash to steam, and produce powerful explosions of fine volcanic ash, according to Edwards.

"These fine particles can be carried much higher into the atmosphere than ash from similar 'dry' eruptions," he says.

When superheated fragments of liquid magma hit cold air, they freeze into billions and billions of particles, driven into the atmosphere by the power of the volcano's eruption.

"Although studies of glaciovolcanism are currently focused on longer-term questions of climate change, the research is helping scientists understand all active and dormant ice-covered volcanoes, including many in North America," says Esperanca.

Several volcanoes in the Cascades, such as Mount Rainier, and volcanoes in Alaska, like the recently active Mount Redoubt, have significant ice cover.

Research on the links between these volcanoes and their ice-covered surfaces is giving scientists and emergency planners critical information.

"We need more studies of present and old eruptions to be prepared to respond to a volcano-ice crisis in North America--or elsewhere around the globe," says Esperanca.

While many geologists are using Iceland as an important way to inform the public about possible dangers from volcanoes, glaciovolcanologists are chomping at their rock hammers--and ice chisels.

They're waiting for Eyjafjallajökull to take a rest. Then they can creep ever closer, eventually getting a look at newly formed glaciovolcanic deposits.

To Edwards and Skilling, the eruption of Eyjafjallajökull shows how complex the dance of a volcano and a glacier can be.