Efforts range from "Herculean" to achievable 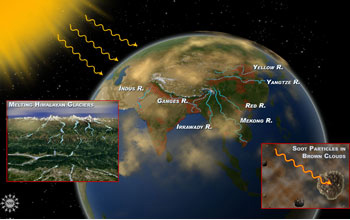 Major greenhouse gas-emitting countries agreed in the December, 2009, climate talks in Copenhagen that substantial action is required to limit the increase of the global average temperature to less than 2 degrees Celsius (3.6 degrees Fahrenheit).

In a paper appearing May 3 in the journal Proceedings of the National Academy of Sciences (PNAS), Veerabhadran Ramanathan and Yangyang Xu, climate researchers at Scripps Institution of Oceanography, University of California, San Diego, have identified three avenues by which the major greenhouse gas-emitting countries countries can avoid reaching the warming threshold. This threshold is a point beyond which many scientists believe climate change will present unmanageable negative consequences for society.

Researchers suggest that exceeding this threshold would trigger irreversible phenomena such as widespread release of methane from melting permafrost and large-scale glacial melt. In turn, these would exacerbate climate change-related problems such as sea-level rise and acceleration of global warming.

"Without an integrated approach that combines carbon dioxide emission reductions with reductions in other climate warmers, and without climate-neutral air pollution laws, we are certain to pass the 2 C threshold during this century," said Ramanathan. However, he added, "I am delighted by the availability of several 'low-hanging fruits' that can help us avert unmanageable climate changes."

Using a synthesis of National Science Foundation (NSF)-funded research performed over the last 20 years, Ramanathan and Xu describe three steps that must be taken to avoid the threshold. They stress that carbon dioxide control alone is not enough.

"The low-hanging fruits approach to one of mankind's great challenges is very appealing because it's win-win," said Jay Fein, program director in NSF's Division of Atmospheric and Geospace Sciences. "It cleans up the environment, protects human health and helps to sustain the 2 C threshold."

The first and second recommended steps in the PNAS paper include stabilizing carbon dioxide concentrations in the atmosphere; and fashioning warming-neutral pollution laws. These laws would balance the removal of aerosols that have an atmospheric cooling effect with the removal of warming agents such as soot and ozone.

Thirdly, the authors advocate achieving immediate cooling through reductions in methane, hydrofluorocarbons and other greenhouse gases that last in the atmosphere for short periods of time.

They believe that simultaneous pursuit of these strategies could reduce the probability of reaching the temperature threshold to less than 10 percent before the year 2050.

The 2 degrees Celsius global temperature increase limit translates to a radiant energy increase of 2.5 watts per square meter. Ramanathan and Xu note that even if greenhouse gas emissions stop increasing in the next five years, human activities will probably create almost double that much radiant energy.

That excess radiant energy, however, is partially compensated for by the masking effect of certain kinds of aerosols that are produced in large part by pollution.

Tiny particles of sulfates and other pollutants serve to cool the atmosphere by reflecting sunlight rather than absorbing it, directing heat away from the Earth's surface.

Therefore, the authors state, pollution control measures must take into account and counterbalance the warming that will happen when these pollutants are removed from the skies.

Ramanathan and Xu acknowledge that there are uncertainties about the nature of aerosols, and the sensitivity of climate to mitigation actions, that make the effects of their suggested course of action hard to determine with precision.

They propose demonstration projects to clarify and reduce the uncertainties, and verify the effectiveness of the various mitigation avenues proposed.

Avoiding the warming threshold requires holding carbon dioxide levels to less than 441 parts per million (ppm), according to the authors, only slightly higher than today's 389 ppm.

This equates to a 50-percent reduction in greenhouse gas emissions by 2050 and an 80 percent reduction by 2100. Ramanathan and Xu acknowledge that such drastic reduction will require a "portfolio of actions in the energy, industrial, agricultural, and forestry sections."

Some of these actions will require development of new technologies.

"A massive decarbonization of the energy sector is necessary to accomplish this Herculean task," the authors write.

But strategies not focused on carbon dioxide reduction can largely take advantage of existing technologies and enforcement of existing regulations, say the authors.

Actions that can be taken immediately include replacement of biomass-fueled stoves with cleaner alternatives in developing countries, and retrofitting of diesel filters on vehicles throughout the world.

The authors also point out that the world has succeeded before in removing dangerous warming agents.

The 1987 Montreal Protocol regulated the use of chlorofluorocarbons; the damaging effect of the chemicals on the planet's ozone layer was diminished.

Ramanathan and Xu note that were it not for the Montreal Protocol, the warming effect of chlorofluorocarbons would have added between 0.6 and 1.6 watts per square meter of extra heat energy by now.