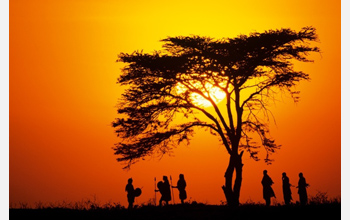 Maasai tribe in Kenya. An example of a large group with maintained cooperation.

Humans are incredibly cooperative, but why do people cooperate and how is cooperation maintained? A new research study by UCLA anthropology professor Robert Boyd and his colleagues from the Santa Fe Institute in New Mexico suggests cooperation in large groups is maintained by punishment.

The finding challenges previous cooperation/punishment models that argue punishment is uncoordinated and unconditional.

To understand the study, let's start with a small group of friends. In small groups, individuals often have personal connections with other group members and cooperation typically is maintained by a "you help me, I'll help you" reciprocity system. Group members cooperate because they do not want to hurt their friends by not participating in group efforts, and also because they may want help in the future.

But in a larger group, like a tribe, those mechanisms for maintaining cooperation are lost. All group members experience the benefits of the large group, even those members who stop cooperating and become "free-riders." Free-riders are people who benefit from the group in food sharing and protection from enemies, for example, without contributing to food collection or war. In these cases, the personal connection to the group's members is often gone.

But it turns out that most members of large groups cooperate. Why? Boyd and his colleagues suggest cooperation is maintained by punishment, which reduces the benefits to free riding. There are tribes, for example, that punish free-riders who do not participate in warfare by not allowing them to take a bride. Thus, there is the threat of losing societal benefits if a member does not cooperate, which leads to increased group cooperation.

Previous models of cooperation assumed that punishment of free-riders was uncoordinated and unconditional. One problem with these models was that the costs associated with punishment were often higher than the gains of cooperation. Thus, the cost of one group member's punishing a free-rider would be substantial and would not overweigh the gains achieved through increased cooperation.

Costs may be defined as loss of friendship or loss of relational closeness with other members of the group.

To address the problem, Boyd and his colleagues changed the assumptions built into previous cooperation/punishment models. First, they allowed for punishment to be coordinated among group members. In their model, group members could signal their willingness to punish someone who was not participating in the group, but punishment would only occur if it was coordinated. This meant the cost of punishing a free-rider would be distributed across members and would not be higher than the cost of gains achieved through increased cooperation.

Second, the researchers allowed for the cost of punishing a free-rider to decline as the number of punishers increased. Boyd explained that this new model was "catching up with common sense" because these two assumptions exist in reality.

The results of their model look a lot like what is seen in most human societies, where individuals meet and decide whether and how to punish group members who are not cooperating. This is coordinated punishment where group members signal their intent to punish, only punish when a threshold has been met and share the costs of punishing.

Boyd argues that even in societies without formal institutions for establishing rules and methods of punishment, group punishment appears to be effective at maintaining cooperation.