Scientists study the February Chilean earthquake, and the likelihood of future such quakes 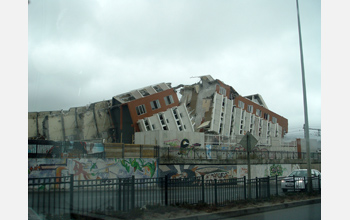 A severely damaged building in Concepcion shows the effects of the latest Chilean earthquake.

In response to the magnitude 8.8 earthquake that occurred in Chile on February 27, 2010, the National Science Foundation (NSF) has awarded three major Rapid Response Research (RAPID) grants to study how the quake happened, and learn from those findings for the future.

The Chile quake is the fifth largest earthquake ever recorded, and the second largest that has occurred since a modern suite of instruments was developed to collect data related to earthquakes.

"The new deployments will provide valuable data to help scientists understand earthquakes not only in Chile, but around the world," says Russ Kelz, program director in NSF's Division of Earth Sciences. "NSF is stimulating important advances in basic earthquake science, rapid-response geophysical and data communications technology, and international collaboration and data sharing."

The day of the quake, a U.S. science team began mobilizing researchers and equipment; within two days, teams in Chile and Argentina were installing temporary CGPS stations.

A preliminary analysis of the CGPS data by the University of Hawaii has shown that between one-quarter and one-third of the entire South American continent experienced measurable motion due to the earthquake, with maximum motions exceeding three meters in southern Chile.

The portable seismographs were installed by scientists at the University of Florida, University of Arizona and Rensselaer Polytechnic Institute.

"Researchers will work on the ground in Chile to deploy these instruments for unattended operation for up to six months," says Eva Zanzerkia, program director in NSF's Division of Earth Sciences.

Geologist Susan Beck of the University of Arizona, a member of the team, says the seismographs arrived just in time: several hundred aftershocks with magnitudes greater than 5.0 have occurred since the initial event.

With data from the instruments, scientists will obtain high-resolution locations of aftershocks, carry out research on Earth structure in and around the Chilean subduction zone, and study major cities for a detailed analysis of local response.

"Because of the huge amount of geodetic and seismological equipment that's now been installed, the Chile quake is likely to become the best-studied great earthquake in history," says Mike Bevis of Ohio State University, also part of the research group. "None of this would have been possible without the strong collaboration of our Chilean and Argentine partners."

U.S. scientists are working with those at the University of Chile, and with scientific teams from France, Germany and England.

Beck says that Chilean and American officials, and other international scientific teams in the region, strongly support open sharing of the data.

"The Chilean earthquake provides an important opportunity to demonstrate the value of this collaborative approach."

All data collected as part of the U.S. deployments will be open and freely available immediately after collection.

More information about these RAPID projects may be found in IRIS Community Instrument Deployment in Chile and Science Highlights 2010 - UNAVCO Event Response.