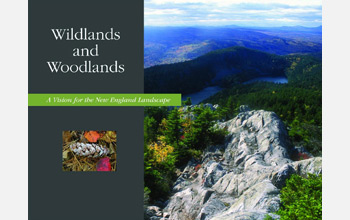 A newly released report looks at loss of forests across New England.

New England forests are at a turning point. After almost 200 years of natural reforestation, forest cover is declining in all six New England states.

The researchers, authors of a report released today--Wildlands and Woodlands: A Vision for the New England Landscape--call for conserving 70 percent of New England as forestland, a target they say is critical to protecting vital natural benefits that would be costly, and in some cases impossible, to replace.

The report was authored by 20 scientists from across New England with expertise in forest science, policy and finance.

It examines forest trends and promotes strategies for permanently retaining 70 percent of the New England landscape in forest over the next 50 years.

"We've been given a second chance to determine the future of the region's forest," says David Foster, lead author of the report and director of the Harvard Forest LTER site. "The report calls attention to the pressing need to couple New England's conservation capacity and shared land ethic with a vision for the next century in which forests remain an integral part of our livelihoods."

Foster points to clean water, climate protection, and a renewable wood supply as examples of the forest's many benefits to society.

Achieving the Wildlands and Woodlands vision will require:

The vision would triple the amount of conserved land in New England while still leaving ample room for future development.

The report calls for conserving most of the landscape (63 percent) as working woodlands owned and managed by private landowners, and protecting a smaller portion (7 percent) as wildland reserves.

"The report's suggestions for conservation are important not only for New England forests, but will provide a model for land-use changes across the country," says Todd Crowl, NSF LTER program director.

"Its findings illustrate the forward thinking that comes from the long-term data and perspectives that underlie the NSF Long-Term Ecological Research Program. Scientists at the two LTER sites featured--Harvard Forest and Hubbard Brook--have been visionary in large-scale, long-term research on forest ecology and ecosystem health and services."

Wildlands and Woodlands cites development and changing forest ownership patterns as two major drivers of forest loss and instability in the region.

The report points to the need to support the interests of the many private landowners who have stewarded the majority of the region's forests for decades and seek to keep their forestlands intact.

When colonial settlers first viewed the region's vast forests, they saw challenge and opportunity; they responded by clearing and farming large areas to support growing settlements while cutting much of the rest.

Then, during the 19th and 20th centuries, the eastern U.S. experienced what has been termed "an explosion of green" as large-scale agricultural production shifted westward and a burgeoning conservation movement reinforced forest recovery.

That history has positioned New England as the nation's most forested region (33 million forest acres of 42 million total acres) and, in its southern reaches, one of the most densely settled.

Now, however, New England's forests are on the wane.

Given those facts, Rob Lilieholm, co-author and forest policy expert at the University of Maine at Orono, points out that a vision for conserving forests at this scale holds many benefits for the people of the region.

"I think it's clear that we all stand to gain from the Wildlands and Woodlands vision," he says. "Landowners will have more options in how they choose to manage their lands."

"The region's forest products sector, vital to the economic health of countless rural communities, will benefit from a secure source of timber. And residents and visitors alike will be able to enjoy these working landscapes and the wide range of services they provide now and in the future."

The report outlines a suite of collaborative, voluntary approaches to accelerate conservation.

James Levitt, co-author of the report and Director of the Harvard Forest Program on Conservation Innovation, says that "New England has, for nearly four centuries, been a leader in conservation.

"With the groundswell of regional interest in wildlands and woodlands specifically, and in landscape-scale conservation generally, New Englanders are well-positioned to provide leadership in the practice of innovative conservation--this time in the 21st century."

The report is available on the Wildlands & Woodlands website.