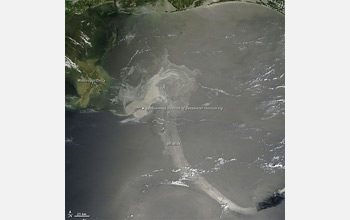 Oil that has reached the Gulf's surface glints in mid-day sunlight.

To understand how the use of dispersants impacts the degradation of oil in the Gulf of Mexico, the National Science Foundation (NSF) has awarded a rapid response grant to scientist David Valentine of the University of California at Santa Barbara and colleagues.

The massive release of oil from the Deepwater Horizon incident on April 20, 2010, has led to an unprecedented use of oil dispersants, which include a mix of surfactant compounds designed to dissolve oil and to prevent slick formation.

"Dispersants are being sprayed aerially and added at the sea-floor, and the total usage is likely to exceed one million gallons before this is over," Valentine says.

Previous research has shown mixed effects, however, of these surfactants on degradation of oil. Little is known about the effects on the ability of microbes that live in the Gulf to naturally degrade the hydrocarbon compounds found in crude oil.

According to Valentine, many different microbes eat oil, but each does so with a different preference for which compounds they attack, like people at a buffet.

Many microbes also produce their own unique surfactants to help corral the oil into a preferred form.

The team seeks to understand how the dispersants added to the spill will interact with natural compounds produced by microbes, and how this will impact the ability of different microbes to break down the oil.

"This research will use a combination of chemical and biological tools to track changes in the composition of the oil, changes in the microbes in the Gulf, and changes in the amount of surfactant present, to determine the impact of these dispersants on oil biodegradation," says Don Rice, program director in NSF's Division of Ocean Sciences, which funded the rapid response award.

Valentine and colleagues are studying how the different dispersants impact the microbes, looking to the molecular patterns of hydrocarbon loss to find answers.

The scientists are acquiring samples of fresh slick oil from near the Deepwater Horizon wellhead; weathered slicks from the offshore environment; and beach tar samples.

Hydrocarbon-degrading bacteria differ in their substrate preferences, as well as in their response to surfactants, which will play an important role in determining the rate and extent of biodegradation of the oil spill.

"We think the dispersants may impact the microbes through interference with the action of their natural dispersants."