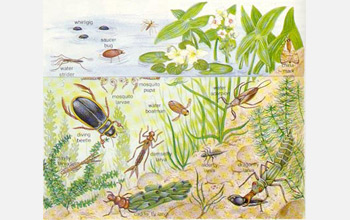 Aquatic insects were among the animals studied in a seven-year pond experiment.

Scientist Jon Chase once worked in a lab that set up small pond ecosystems for experiments on species interactions and food webs.

"We would try to duplicate pond communities with a given experimental treatment," he says.

"We put 10 of this species in each pond, and five of these species, and eight of the other species, and 15 milliliters of this nutrient and 5 grams of that and 'sproing,' every replicate would do its own thing and nothing would be like anything else.

"That made me curious. What if, instead of trying to eliminate the messiness, I tried to figure out where it was coming from?"

The results of that investigation are published online this week in Science Express. A seven-year experiment isolated one reason experimental ponds go wild: history.

If a pond has enough nutrients, the pond community that emerges depends on the order in which species were introduced, says Chase, an ecologist at Washington University in St. Louis.

The discovery has broad implications for highly productive ecosystems such as tropical rainforests and coral reefs, and for attempts to restore these ecosystems.

Restoration can fail if the original ecosystem bears the imprint or memory of its past in ways that are not understood.

"This study is an important experimental confirmation of the influence of primary productivity on regional biodiversity," says Alan Tessier, program director in the National Science Foundation (NSF)'s Division of Environmental Biology, which funded the research.

"The findings have broader relevance to the protection and restoration of biodiversity."

In the summer of 2002, Chase embarked on the long-term pond experiment at the Tyson Research Center, a 2,000-acre field station on the outskirts of St. Louis, and owned by Washington University.

He set out 45 cattle tanks in an old field, added dirt to each and filled them with well water.

The 300-gallon tanks are not as big as regular ponds, he says, but they're "decent-sized. I've even had herons try to fish in them, although they're a bit small for that."

He dosed the ponds with nutrients in the form of nitrogen- or phosphorus-containing chemicals. Each pond received low, medium or high levels of nutrients throughout the experiment.

Then he began adding species to the ponds. The species consisted of zooplankton; insects and small invertebrates such as snails; vascular aquatic plants; and filamentous green algae.

In the third year, the pond got a soup containing the remaining species.

Each pond received species in a different order but in the end, every pond got exactly the same species.

"Then we let nature take over," Chase says. "The plankton moved around in the wind and on frogs' backs, dragonflies flitted over and laid their eggs, beetles buzzed by, and it was a 'big happy wetland community.'"

Chase and a team of students sampled the ponds each summer to see how the communities were faring.

There were no big differences among the ponds when it came to number of species. The low productivity ones had roughly as many species as the high productivity ponds.

The biodiversity arose at a different scale, not within a pond but within a group of high-productivity ponds.

This kind of diversity is called beta diversity to distinguish it from local, or alpha diversity.

It directs our attention, Chase says, to ecosystem structure that emerges only at a certain scale. Beta diversity may emerge clearly only if we look regionally rather than locally.

Restorationists say ecology is plagued by the myth of the carbon copy, the idea that we can easily make an identical copy of an ecosystem because community assembly is predictable and always ends up in the same place.

Degrading an ecosystem resets it to an earlier stage, it was thought, from which it will develop in a predictable fashion to an end point.

But experience shows that replacement ecosystems often fall short of the original ones.

Far from being carbon copies, ecosystems are historical artifacts, their final form a sensitive record of their past.