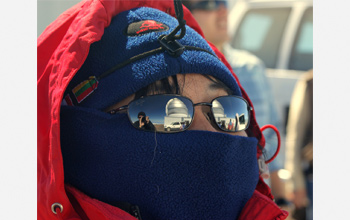 Gemini North reflected in the sunglasses of researcher Layne as she enjoys a crisp winter day.

Eyes on the Sky tells the story of NSF's role in supporting ground-based astronomy and together with NSF's science communicators' conference, "Future Science: The Frontiers of 21st Century Astronomy," will help prime reporters on grand challenge topics in astronomy today.

The National Science Foundation (NSF) invites science communicators to visit www.nsf.gov/eyesonthesky and to attend Future Science: The Frontiers of 21st Century Astronomy. This science communicators' conference will be moderated by Miles O'Brien, managing editor of Space Flight Now's "This Week in Space," and former chief technology and environment correspondent at CNN. Panelists will explore the current state of our understanding, the most recent results of ongoing research, and the future trajectory in this field. During lunch, Seth Shostak, senior astronomer at the SETI Institute (Search for Extraterrestrial Intelligence) will speak on "Searching for ET: the Agony and the Ecstasy."

Grand Challenge Topics for Discussion, Led by Noted Experts in the Field:

In its infancy the universe was suffused with a dense, obscuring fog of primordial gas. As the first stars switched on, they began to reionize the cosmos, punching ever-larger holes in their murky surroundings. Eventually, the effect of these young, massive stars enabled light to shine freely through space. Peering ever deeper into these "dark ages" has been both a challenge and a quest for astronomers, with today's best telescopes giving tantalizing clues as to the nature of these early stars and the assembly of the very first galaxies.

From a collapsing cloud of dust and gas four-and-a-half billion years ago, the Earth and rest of our solar system began to form. The exact processes that drive star and planet formation, however, are not well understood. Tracking the evolution of nascent stars and protoplanetary disks will give astronomers many of the missing pieces to this intriguing puzzle. Recent discoveries in infrared and radio astronomy are also helping to unravel this mystery.

The universe is a great laboratory that challenges the frontiers of physics. The most advanced laboratories on earth never will match the extreme conditions provided by black holes, pulsars, or supernova explosions. The next generation of telescopes will allow us to tap these exotic laboratories to make major advances in understanding particle physics, general relativity, and other fundamental areas of science.

For decades, astronomers assumed that the expansion of the universe was slowing. Scientists studying distant galaxies and supernovae were surprised to discover, however, that the universe was actually expanding faster and faster. Astronomers have attributed this to an unknown force called "dark energy." By studying the most distant objects, astronomers hope to shine more light on this mysterious repulsive force, how it affects matter, and what part it will play in the future evolution of the Universe."

The program's agenda, biographical information on each speaker, as well as recent discoveries in each of grand challenge areas, are spotlighted on this new website. The website also includes another grand challenge topic, the search for exosolar planets.