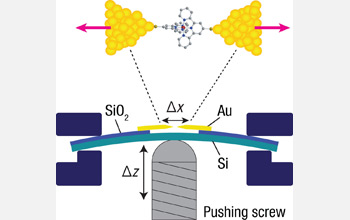 Research shows single-molecule devices can be used for detailed studies of fundamental physics.

The finding, reported in the June 11 issue of the journal Science, probes the effects of strong electron interactions that can be important when shrinking electronics to their ultimate small size limit--single-molecule devices. The work resulted in the first precision tests of a phenomenon known as the underscreened Kondo effect.

"The main advance in our work is that we show single-molecule devices can be very useful as scientific tools to study an interesting phenomenon that has never before been experimentally accessible," said Dan Ralph, the Cornell physics professor who led the study.

"Single-molecule devices can indeed be used as model systems for making detailed quantitative studies of fundamental physics inaccessible by any other technique," said first author Joshua Parks, a postdoctoral associate in Cornell's Department of Chemistry and Chemical Biology.

Using a cobalt-based complex cooled to extremely low temperatures, Ralph, Parks and an international team of researchers watched electrons move through single molecules and accomplished a feat that until now escaped chemists and physicists. They were able to study the resistance of the flow of electricity within a system's electric field as the temperature approaches absolute zero.

This is known as the Kondo effect.

In physics, the Kondo effect is perhaps the most important model for understanding how electrons interact within a system such as a molecule. Because of the Kondo effect, when a spinning molecule is attached to electrodes, interactions between the molecule and electrons lead to coordinated motion of the electrons, resulting in a localized cloud of electrons that cancels out the molecule's spin and permits the electrons to flow with decreasing resistance as the temperature approaches zero degrees Kelvin, -273 degrees Fahrenheit.

However, theories since 1980 have also predicted for certain types of high-spin molecules the possibility of an underscreened Kondo effect, in which the spin of the molecule is not completely cancelled and the resulting correlations between the flowing electrons are not as complete.

The researchers tested the Kondo effect by placing the cobalt-based complex between two electrodes and slowly stretching individual spin-containing molecules. They were able to manipulate the molecule's magnetic properties and make precise tests of how electrical resistance changes with variations in temperature. The results were found to be in good agreement with predictions for the underscreened Kondo effect.

"The research shows mechanical control can be a realistic strategy for manipulating molecular spin states, to supplement or replace the use of magnetic fields in proposed applications such as quantum computing or information storage," said Parks.

Researchers from the Institute for Solid State Research and Institute for Advanced Simulation, Germany and the Bariloche Atomic Center and the Balseiro Institute, Argentina participated in this study.