Mysterious Clouds Produced When Aircraft Inadvertently Cause Rain or Snow

Jets, turboprops leave behind odd-shaped holes or channels in the clouds 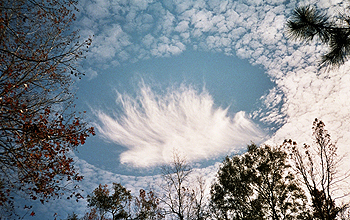 As turboprop and jet aircraft climb or descend under certain atmospheric conditions, they can inadvertently "seed" mid-level clouds, causing narrow bands of snow or rain to develop and fall to the ground, new research finds.

Through this seeding process, the aircraft leave behind odd-shaped holes or channels in the clouds that have long fascinated the public.

The key ingredient for developing these holes in the clouds: water droplets at subfreezing temperatures, below about 5 degrees Fahrenheit (-15 degrees Celsius).

As air is cooled behind aircraft propellers or over jet wings, the water droplets freeze and drop toward Earth.

"Anytime aircraft fly through these specific conditions, they are altering the clouds in a way that can result in enhanced precipitation nearby," says Andrew Heymsfield, a scientist with the National Center for Atmospheric Research (NCAR) in Boulder, Colo., and lead author of a paper reporting results of research into the phenomenon.

A similar process can occur with jet aircraft, which need colder temperatures (below about -4 to -13 degrees F, or -20 to -25 degrees C) to generate the seeding effect. Air is forced to expand over the wings as the aircraft moves forward, cools, and freezes the cloud droplets.

Precipitation from planes may be particularly common in regions such as the Pacific Northwest and western Europe because of the frequent occurrence of cloud layers with supercooled droplets, Heymsfield says.

Results of the study, which addressed long-standing questions about unusual cloud formations known as hole-punch and canal clouds, are published this month in the Bulletin of the American Meteorological Society.

In addition to NCAR scientists, the team included researchers from Colorado State University and the University of Wyoming, as well as a retired cloud physicist.

"These results indicate how aircraft influence clouds and precipitation," says Brad Smull of the National Science Foundation (NSF)'s Division of Atmospheric and Geospace Sciences, which funds NCAR.  "For several decades, scientists have wondered about the causes of clouds with these [hole-punch] gaps.  The new findings are of particular interest to researchers studying natural processes in clouds."

Across the world, sightings of blue-sky holes piercing a cloud layer have triggered bemusement and speculation.

A front-page feature on Yahoo! carried the headline "A Halo over Moscow" after photos emerged of just such a hole in October 2009.

Researchers have proposed a number of possible aviation-related causes, from acoustic shock waves produced by jets, to local warming of the air along a jet's path, to the formation of ice along jet contrails. Indeed, the earliest observations implicated jet aircraft, but not propeller aircraft, as producing the holes.

Researchers in the 1980s observed that propeller aircraft could transform supercooled droplets into ice crystals, and experiments were launched in the 1990s to characterize the phenomenon.

But scientists had not previously observed snow as it fell to the ground as a result of aircraft until Heymsfield and his colleagues happened to fly through some falling snow west of Denver International Airport with an array of instruments.

While they did not notice anything unusual at the time of their 2007 flight, a subsequent review of data from a ground-based radar in the area revealed an unusual echo, indicating that the band of precipitation had evolved quickly and was unusually shaped.

"It became apparent that the echo had evolved in a unique way, but I had no satisfactory explanation," says Patrick Kennedy, a Colorado State University radar engineer who spotted the unusual readings and helped write the paper.

Heymsfield and Kennedy went back through data from their aircraft's forward- and downward-viewing camera. They noticed a hole in an otherwise-solid deck of altocumulus clouds in the forward imagery, as well as a burst of snow that extended to the ground.

Since the hole was oriented in the same direction as the standard flight tracks of commercial aircraft in the region, Heymsfield surmised that a plane flying through the cloud might have somehow caused ice particles to form and "snow out" along its path, leaving a canal-shaped, hole-punch cloud behind.

A subsequent review of flight track records from the Federal Aviation Administration revealed that turboprop planes operated by two airlines flew close to the hole-punch location, following a standard flight path that produced the subsequent band of snow.

Snow crystals began falling about five minutes after the second aircraft flew through the cloud.

The snowfall, in a band about 20 miles long and 2.5 miles wide, continued for about 45 minutes, resulting in about two inches of snow on the ground.

The researchers also examined data from onboard spectrometers that profiled the snowflakes in the band of snow beneath the hole-punch.

These plate-shaped crystals showed evidence of riming (accumulation of liquid water), whereas ice particles elsewhere in the cloud showed little or no riming.

"This tells us that the aircraft literally ‘seeded' the cloud just by flying through it," Heymsfield says.

The cloud layers outside Denver contained supercooled droplets --particles of water that remain liquid even at extremely low temperatures.

The research team conducted additional studies into the cooling over the wings of jet aircraft, thereby accounting for earlier observations of the impact of jets.

"This apparently happens frequently, embedded in the cloud layers," Heymsfield says. "You wouldn't necessarily see it from satellite or from the ground.

"I had no idea this was happening. I was sitting in back of the plane.  And then this data set just fell in our laps. It was a lucky break."