Evolutionary potential, edge zones, should be considered as factors 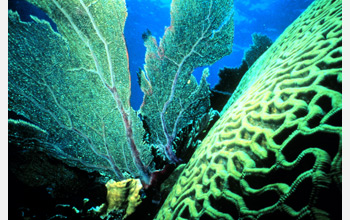 A thriving, healthy Carribean coral reef today: its evolution is an important factor in its future.

Conservation efforts aimed at protecting endangered Caribbean corals may be overlooking regions where corals are best equipped to evolve in response to global warming and other climate challenges.

Budd and Pandolfi focus on understanding the biodiversity of reef-building corals--organisms that are highly diverse and seriously threatened.

Their work focuses on evolutionary processes documented in the fossil record over long time periods, a history that encompasses and shows the effects of global environmental change.

"The research demonstrates that the predominance of evolutionary innovation occurs at the outlying edges of Caribbean coral species ranges, as opposed to the well-connected central part of the Caribbean," said H. Richard Lane, program director in the National Science Foundation (NSF)'s Division of Earth Sciences, which funded the research along with NSF's Division of Environmental Biology.

The scientists conclude that if coral reef conservation strategies protect only the centers of high species richness, they will miss important sources of evolutionary novelty during periods of global change.

"However, areas ranked highly for these factors may not represent regions of maximum evolutionary potential."

Budd and Pandolfi conducted their study by analyzing the relationship between geography and evolutionary innovation in a complex of Caribbean reef corals where morphological and genetic data match on species differences.

Based on a comparison of fossil corals and modern colonies, the scientists found that morphological disparity varies from the center to the edge of the Caribbean, and that lineages are static at well-connected central locations--but split or fuse in edge zones.

"The results show that edge zones are critical to biodiversity," Budd said.

The findings mirror those of studies of the molecular biogeography of sea urchins and other marine invertebrates, she said, and are important to understanding the evolutionary ecology of the sea under projected global climate change.

The scientists argue for a coral reef conservation strategy that not only takes into account biodiversity hotspots, but also focuses on evolutionary processes and the preservation of peripheral areas of species ranges, as well as connectivity among populations.