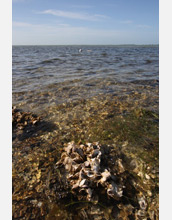 The Gulf of Mexico has long supported extensive oyster beds and a thriving oyster harvest.

Three places among dozens in the Gulf of Mexico where oyster beds have thrived.

How are the oysters faring with the oil spill? The National Science Foundation (NSF) has awarded a rapid response grant to scientists Crystal Johnson, Gary King and Ed Laws of Louisiana State University (LSU) to find out.

The researchers will look at how the abundance and virulence of naturally-occurring bacteria called Vibrio parahaemolyticus and Vibrio vulnificus, often found in oyster beds, may change in response to the spill.

The findings will provide insights into vibrios' ability to "consume" oil, and will allow the biologists to uncover antibiotic compounds in certain species of phytoplankton that live in association with vibrios.

"Adaptation to the spilled oil may result in an increase in some types of vibrios," says Johnson. "We believe that vibrios will change in response to the stress of direct exposure to oil and/or to indirect effects of interactions with other species affected by oil."

Vibrios are carried by and cause disease in many marine animals, including crabs, shrimp, crawfish and oysters, but the vast majority of the bacteria are harmless--and may even help break down the components of the oil.

"Little is known about how microbes--in the water, along coasts, and associated with other species--are affected by the spill," says Phillip Taylor, acting director of NSF's Ocean Sciences Division.

"Through this NSF rapid response grant, these scientists will be able to track the oil's effects on marine species living in the Gulf, and by extension, the possible threat to human health."

Several types of vibrios cause disease in humans, including gastroenteritis and, by infecting open wounds, septicemia or blood infections.

Through an existing NSF Ecology of Infectious Diseases (EID) grant, the researchers are identifying environmental factors favorable to the presence and transmission of pathogenic, or disease-causing, vibrios.

"The work will make it possible to more precisely predict when levels of these bacteria are high," says Sam Scheiner, director of NSF's EID Program.

In the rapid response grant, the team is building on a database already developed through collecting samples for the EID project.

"We're comparing the response of microbes and oysters to water quality before and after the spill," says Johnson.

Vibrios form specific associations with phytoplankton such as diatoms and algae, says King.

"Oil-induced changes in phytoplankton community composition and their associated bacterial communities are related to changes in vibrio abundance," he says.

Some species of phytoplankton in Louisiana and Mississippi coastal waters may excrete antibiotics that inhibit the growth of vibrios, according to Laws.

"We're trying to find out how widespread this may be," Laws says, "and to isolate and identify these antibiotics.  The results eventually may lead to use of the compounds in the treatment of vibrio infections."

Oysters in Mississippi Sound, Port Fourchon and Cocodrie may be able to tell us about much more than oil.