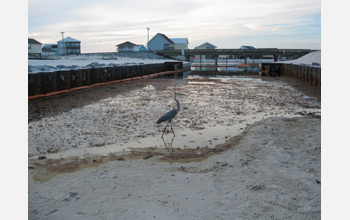 Oil has washed up along miles of Gulf coast beaches, geologists funded by NSF are finding.

The first determination of "beach-fall" of oil along the Alabama and northwest Florida beaches has been made, say National Science Foundation (NSF)-funded geologists at the University of South Florida (USF).

Wang received an NSF rapid response grant for the research.

"The baseline information Wang and colleagues have assembled is an invaluable data set for assessing the mixing of oil in beach sands across the Mississippi, Alabama and western Florida shorelines," said H. Richard Lane, program director in NSF's Division of Earth Sciences, which co-funded Wang's rapid response award with NSF's Division of Ocean Sciences.

The researchers studied a stretch of coastline from Alabama's Dauphin Island to the eastern end of Santa Rosa Island in Florida, including 17 sections of northeast Gulf beaches and six marsh areas in the eastern Mississippi Sound.

While crews cleaning beaches along the Gulf coast where oil is washing ashore have become a common sight, Wang said cleanup efforts are leaving behind numerous small tar balls and contaminated beaches.

Although most of the larger tar balls are removed, the cleanup efforts don't return the beaches to their pre-spill condition. The tar balls can become easily buried in the sand, Wang said. Buried oil, he said, is more difficult to remove and may decay more slowly than exposed tar balls.

The findings represent conditions along the studied stretch of coastline through June 9th, and include results associated with varying degrees of beach cleanup.

The intensity of the beached oil decreased generally from west to east, but the study was conducted before wind conditions began moving oil farther east toward more stretches of Florida Panhandle shorelines.

The researchers first traveled the northern Gulf beaches from May 7th-19th to gather baseline data on beach conditions.

These pre-beach-oiling data were collected along pristine beaches in state and national parks, as well as along heavily developed stretches of beach.

In addition to examining the beaches for oil, the scientists conducted short coring operations to get a complete picture of beach conditions before the oil arrived.

On their first research trip in May, the researchers found unsoiled white quartz sand (also known as "sugar sand"), which has made the area's beaches among the world's most famous.

By the time the geologists returned in June, the shores were marked with sticky tar balls, some as large as pancakes.

The strengthening of summer sea breezes will provide stronger on-shore forcing to push the oil onto the beaches, Wang said.

"High waves and storm surges are capable of spreading the oil contamination over a much larger area than the narrow beach zone where the tar balls are currently found," Wang said.

"It doesn't need to be a major hurricane to push the oil onto the shore and spread it over a large area--it just needs to be a storm."