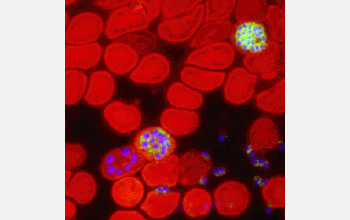 Scientists have determined the evolutionary timeline for the microscopic parasites that cause one of the world's most widespread infectious diseases: malaria.

Having an understanding of the origins of the lineages of such pathogens, or disease-causing organisms, is fundamental to understanding emerging diseases, according to the researchers.

The origin of malaria in humans has been dated to as recent as 10,000 years ago and as long as several million years ago.

Now biologists Robert Ricklefs of the University of Missouri-St. Louis and Diana Outlaw of Mississippi State University in Starkville have found a molecular clock for malaria parasites that provides a more precise date.

The results of their research, funded by the National Science Foundation (NSF), appear in this week's issue of the journal Science.

The findings provide a well-supported time calibration for the evolution of malaria parasites.

By marrying DNA research with a new statistical approach, the biologists were able to get a better handle on the timeline of parasite evolution.

The scientists found that a key gene in malaria parasites evolved at 60 percent of the rate of the same gene in its hosts.

Knowing the rate of gene evolution of the vertebrate hosts, the biologists were able to estimate that modern malaria parasites began to diversify across mammals, birds and reptiles about 16 million years ago.

The ancestors of humans acquired the parasite 2.5 million years ago.

"Malaria parasites undoubtedly were relatively benign for most of that history, becoming a major disease only after the origins of agriculture and dense human populations," said Ricklefs.

"These findings are important in providing a quantitative rate of evolution for malaria," said Alan Tessier, program director in NSF's Division of Environmental Biology, which funded the research.

"They also reveal that host-switching can result in a rapid diversification of parasites, and decouple their evolution from that of their hosts," Tessier said.

"Because single-celled malaria parasites leave no fossil record, one has to estimate their rate of evolution by comparison with their hosts," said Ricklefs.

Ricklefs and Outlaw's research suggests that the parasites may jump to new, unrelated hosts at any time.