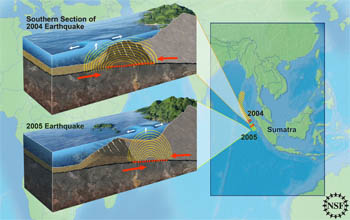 Researchers found differences in the regions where the 2004 and 2005 Sumatran earthquakes occurred.

View a webcast with Sean Gulick of the University of Texas at Austin.

Sumatra experiences frequent seismic activity because it is located near the boundary of two of Earth's tectonic plates. Earthquakes occur at 'subduction zones,' such as the one west of Indonesia, when one tectonic plate is forced under another--or subducts. Instead of sliding across one another smoothly, the plates stick, and energy builds up until they finally slip or 'rupture', releasing that stored energy as an earthquake.

These earthquakes can generate tsunamis when the seafloor moves up or down rapidly. But why do some earthquakes, such as the 2004 Sumatra "Boxing Day Tsunami", create large hazards, while others do not?

Three months after the catastrophic December 2004 earthquake and tsunami events, another strong, albeit smaller, quake occurred immediately to the south, but this earthquake triggered only a local tsunami.

"Many people wondered why the 2004 quake was so large," said Sean Gulick, a geophysicist from the University of Texas at Austin. "Perhaps a more interesting question is: why wasn't it larger? Why did the rupture occur as two events instead of one large one?"

With support from the National Science Foundation (NSF), Gulick joined an international research team to try to figure out why there were two quakes, and what made them so different. Working aboard the research vessel Sonne, the scientists used seismic instruments to study layers of sediment beneath the seafloor with sound waves.

The researchers found that the fault surface where the two tectonic plates meet, called a décollement, has different properties in the two earthquake rupture regions. In the southern part of the 2004 area, the décollement imaging results show a bright reflection, while the décollement in the 2005 area does not. This difference in the images suggests changes in the composition of the rocks--or the fault itself--between the rupture areas. These characteristics may partially explain why the areas did not rupture together and may also contribute to differences in the tsunamis produced by both events.

Scientists believe this difference in composition, combined with several other factors, resulted in the fault slipping over a much wider part of the margin and farther seaward in the 2004 event. They suspect that because more earth moved, more of the seafloor moved and more water was displaced, resulting in a larger tsunami.

Compared to similar studies of other subduction zones around the world, the team believes the region of the 2004 Sumatra earthquake is very unusual, and that tsunami hazards may be particularly high in this area.

The results of their study appear in the July 9 edition of the journal Science. The paper's lead author is Simon Dean, of the University of Southampton (UK). Researchers from the University of Texas at Austin (US), the Agency for the Assessment and Application of Technology (Indonesia), and the Indonesia Institute for Sciences also contributed to the work.