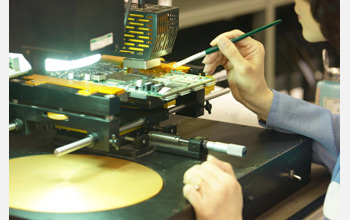 In 2008, 1.9 million employees of U.S. R&D companies were engaged in R&D activities worldwide.

U.S. R&D companies--companies located in the United States that performed or funded research and development (R&D) domestically or in their overseas locations--employed 27.1 million workers worldwide in 2008, according to a new National Science Foundation report.

The figures are the first employment statistics from the new Business R&D and Innovation Survey (BRDIS), developed jointly by NSF and the U.S. Census Bureau. Earlier this year, this same survey yielded information for the first time about worldwide sales and monetary amounts spent on R&D by U.S.-based companies. Data from that report can be found in an NSF press release and in an InfoBrief published in May.

Policymakers and industry officials consider these numbers important because workers engaged in R&D activities directly influence the creation and diffusion of knowledge, and in turn contribute to innovation and economic growth. The proportion of R&D employment relative to total employment, or R&D employment intensity, is one indicator of a company's involvement in R&D activity.

In 2008, about 1.5 million, or 77 percent, of U.S.-based companies' 1.9 million worldwide R&D employees worked in the United States and 448,000, or 23 percent, worked at foreign locations of U.S. companies. Company-performed R&D per R&D employee (R&D expenditures divided by R&D employment) varied among domestic and foreign activities. For example, companies spent a total of about $181,000 on R&D per R&D employee worldwide, whereas the domestic and foreign figures were estimated to be about $194,000 and $140,000, respectively.

These statistics are preliminary; final and more detailed data will be available in early 2011. New measures from BRDIS related to R&D employment will be available in future publications and will include R&D employment by selected occupational category (engineers, scientists, technicians, and support staff); level of educational attainment (Ph.D. and other college degrees); and sex. The survey will also provide the number of non-U.S. citizens employed by industry as R&D scientists and engineers in the United States with temporary visas.

A third InfoBrief on business innovation, "R&D and Innovation in Business: 2008," will present additional, preliminary BRDIS data for 2008. It is being prepared, but not yet scheduled for publication. Detailed tables for 2008 will be available on the BRDIS Web page.