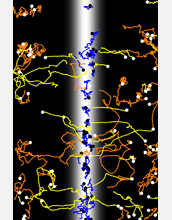 Trajectories of Oxyrrhis marina in a patch of DMSP in the ocean are tracked by scientists.

Video showing microorganisms responding rapidly to a patch of DMSP.

New research indicates that the interactions of microscopic organisms around a particular organic material may alter the chemical properties of the ocean--influencing global climate by affecting cloud formation in the atmosphere.

Justin Seymour, a research fellow at the University of Technology Sydney, is the lead author of a paper reporting the results, published in this week's issue of the journal Science.

The paper describes how a relative of the chemical that seabirds and seals use to locate prey, dimethylsulfide (DMS), may serve a similar purpose at the microbial scale, helping marine microorganisms find food and cycle chemicals that are important to climate.

"These scientists have used impressive technology to study interactions between organisms and their chemical environment at the scales they actually take place," said David Garrison, director of the National Science Foundation (NSF)'s biological oceanography program, which funded the research.

"The research will give us new insights on the workings of microbial assemblages in nature."

Seymour agrees. "We found that ecological interactions and behavioral responses taking place within volumes of a fraction of a drop of seawater can ultimately influence important ocean chemical cycling processes."

Using microfluidic technology, the team of researchers, led by Roman Stocker of the Massachusetts Institute of Technology, recorded microbes swimming toward the chemical dimethylsulfoniopropionate (DMSP) as it was released into a tiny channel occupied by the microbes.

The fact that the microbes actively moved toward the DMSP indicates that the tiny organisms play a role in ocean sulphur and carbon cycles, which exert a powerful influence on Earth's climate.

How fast the microorganisms consume DMSP--rather than converting it into DMS--is important because DMS is involved in the formation of clouds in the atmosphere.

This in turn affects the heat balance of the atmosphere.

Seymour, Stocker, Rafel Simó of the Institute for Marine Sciences in Barcelona, and MIT graduate student Tanvir Ahmed carried out the research in Stocker's MIT laboratory.

The study is the first to make a visual record of microbial behaviour in the presence of DMSP.

"It's important to be able to directly look at an environment in order to understand its ecology," Stocker said.

"We can now visualize the behavior of marine microorganisms much like ecologists have done with macro-organisms for a long time."

To accomplish this, the team recreated a microcosm of the ocean environment using a microfluidic device about the size of a flash drive with minuscule channels engraved in a clear rubbery material.

The scientists injected DMSP into the channel in a way that mimics the bursting of an algal cell after viral infection--a common event in the ocean--then, using a camera attached to a microscope, they recorded whether and how microbes swam toward the chemical.

The researchers found that some marine microbes, including bacteria, are attracted to DMSP because they feed on it, whereas others are drawn to the chemical because it signals the presence of prey.

This challenges previous theories that this chemical might be a deterrent against predators.

"Our observations clearly show that, for some plankton, DMSP acts as an attractant towards prey rather than a deterrent," said Simó.

"By simulating the microscale patches of the chemical cue and directly monitoring the swimming responses of the predators towards these patches, we get a much more accurate perception of these important ecological interactions than can be obtained from traditional bulk approaches."

The research also indicates that marine microorganisms have at least one behavioral characteristic in common with larger sea and land animals: we're all drawn to food.

In next steps, the team plans to extend the research from the laboratory to the ocean environment.

The scientists are working on an experimental system that can be used on oeanographic ships working with bacteria collected directly from the ocean.

The research was also funded by the Australian Research Council, the Spanish Ministry of Science and Innovation, La Cambra de Barcelona, and the Hayashi Fund at MIT.