From the Heart: How Cells Divide to Form Different but Related Muscle Groups 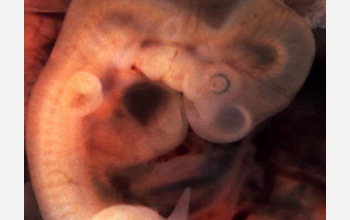 
Developing sea squirts provide clues about the origin of the heart-jaw connection in vertebrates.

View a video showing what sea squirt development tells us about the heart-jaw connection.

Using the model organism Ciona intestinalis, commonly known as the sea squirt, researchers at the University of California, Berkeley, have uncovered the origins of the second heart field in vertebrates.

Sea squirts are bag-like gelatinous creatures whose full genome has been sequenced--one that shares 80 percent of its genes with humans. Though its body is clearly more primitive than creatures with backbones and spinal columns, the sea squirt nevertheless offers a valuable resource to scientists seeking to understand the evolutionary links between these simple chordates and more complex creatures.

Vertebrate hearts form from two distinct cell populations, termed first heart field and second heart field. From these fields are derived, respectively, the left ventricle and the right ventricle and outflow tract of the heart. The lineage relationship between these cell types was uncertain but mysteriously, a number of reports linked cells in the second heart field to muscle cells in the lower jaw in birds and mammals.

"The heart-jaw connection is evolutionarily ancient," said developmental biologist Mike Levine."We think the sea squirt is valuable as a developmental model to study these connections because it is a simple chordate that is the closest living relative of vertebrates, including humans."

By tracking the movement of specific cells during embryonic development, Levine and his team found that heart progenitor cells also produce the atrial siphon muscles (ASMs--responsible for expelling water during feeding) in Ciona. Researchers think it is possible that the atrial siphon in the sea squirt is the equivalent of the lower jaw in vertebrates. During development, the ASM precursor cells in Ciona express the same markers seen in cells that form the jaw muscles and second heart field in vertebrates, evidence that supports the idea that these muscle groups are linked. These results also suggest that "re-routing" of jaw cells into the developing heart could lead to evolution of the more intricate hearts seen in higher vertebrates such as humans.

"This is an exciting discovery, because we still don't know the rules for evolving novelty," Levine explained. "We understand how you lose things via evolution, but we really don't understand how you make something more complex."

This study is published in the July 30 issue of the journal Science.