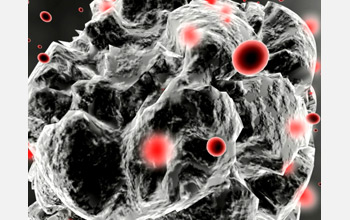 View a video about FAST-ACT powders.

Developed by Kenneth Klabunde of Kansas State University, and improved over three decades with support from the National Science Foundation, the FAST-ACT material has been a tool of first responders since 2003.

Now, NanoScale Corporation of Manhattan, Kansas--the company Klabunde co-founded to market the technology--has incorporated FAST-ACT into a cartridge that breaks down the corrosive drywall chemicals.

Homeowners have reported that the chemicals--particularly sulfur compounds such as hydrogen sulfide and sulfur dioxide--have caused respiratory illnesses, wiring corrosion and pipe damage in thousands of U.S. homes with sulfur-rich, imported drywall.

"It is devastating to see what has happened to so many homeowners because of the corrosive drywall problem, but I am glad the technology is available to help," said Klabunde. "We've now adapted the technology we developed through years of research for FAST-ACT for new uses by homeowners, contractors and remediators."

The new cartridge, called OdorKlenz®, takes the place of the existing air filter in a home. The technology is similar to one that NanoScale adapted in 2008 for use by a major national disaster restoration service company for odors caused by fire and water damage.

In homes with corrosive drywall, the cartridge is used in combination with related FAST-ACT-based, OdorKlenz® surface treatments (and even laundry additives) to remove the sulfur-bearing compounds causing the corrosion issues.

Developers at NanoScale tested their new air cartridge in affected homes that were awaiting drywall removal, and in every case, odor dropped to nearly imperceptible levels within 10 days or less and  corrosion was reduced.

The FAST-ACT material is a non-toxic mineral powder composed of the common elements magnesium, titanium and oxygen. While metal oxides similar to FAST-ACT have an established history tackling dangerous compounds, none have been as effective.

NanoScale's breakthrough was a new method to manufacture the compound as a nanocrystalline powder with extremely high surface area--only a few tablespoons have as much surface area as a football field.

The surface area allows more interactions between the metal oxides and the toxic molecules, enabling the powder to capture and destroy a large quantity of hazardous chemicals ranging from sulfuric acid to VX gas--and their hazardous byproducts--in minutes.

"The concept of nano-sized adsorbents as both a cost-efficient, useful product for first responders and an effective product for in-home use illustrates the wide spectrum of possibilities for this technology," said NSF program director Rosemarie Wesson, who oversaw NanoScale's NSF Small Business Innovation Resarch grants.  "It is great to see the original work we supported to help reduce the toxic effects of hazardous spills now expand into other applications."

In coming months, the company is proposing its technology for use in Gulf Coast residences affected by the recent oil spill and other hazardous situations where airborne toxins are causing harm.

In addition to extensive support from NSF, the development of FAST ACT and NanoScale's technology has been supported by grants from the U.S. Army, DTRA, Air Force, DARPA, JPEO, MARCORSYSCOM , the CTTSO, USSOCOM, NIOSH, DOE, NIH and EPA.